Time for Another Book Gloat!

So yesterday I had the chance to go book shopping in Saratoga Springs, and found myself rummaging through the holdings of Lyrical Ballad Bookstore. I was sorely tempted, I admit, by the four volume Nonesuch Blake set (all of Blake in three volumes, and a biography by Mona Wilson in a uniform volume)(oh, was I--have the one volume Nonesuch from 1927, and it's a very nice reading copy, but this was sodding gorgeous.)

But I did fill a long-ached for need: At last, I found a good copy of Goethe's Faust, both parts in two volumes. For decades, I've only had the 1980s paperback Norton Critical Edition I bought in college, a stolid translation by Walter Kaufman (the modern Norton is not the same edition as I had). Now, as I've previously written, I have been fascinated by the Faust legend since seeing my cousin Robert Stattel in a superb, coruscating performance of the role. Despite this, I admit that Kaufman's serviceable but stolid translation left me languishing in the swamp of blasé.

So when I ran upon this little item, my interest was piqued: 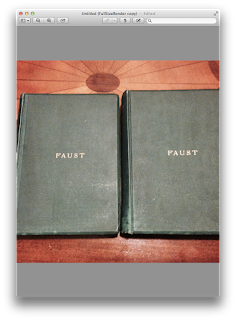 A little water stained at the bottom of the spine, but crisp and nice copies from 1879 with beveled board, nice rich paper and big friendly print. I'm starting to appreciate that last.

I opened up the first volume: 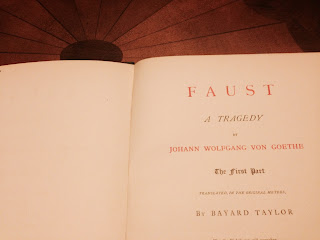 I dipped into the text, and, although it was in poem form, it was not highfaluting. On fact, its failings lim, as far as I could see, the other way--a bit louche, almost chatty. My Personal Book Shopper (tm) --who just scored me a near complete set of Barbara Pym, with three reference volumes--and self-proclaimed Domineditrix tut-tutted a little.

"Not the best translation," she sniffed, continuing: "some of the English isn't the best reflection of the German." She looked at me with the solemn air of someone who has kept up her fluency, gazing at one who--alas!--has not.

I didn't, but could have replied, "Ah, but this one looks much more fun than poor old Kaufmann." I'd have been right too. But, fair dos, I'm sure she's right on the flaws of the translation. She knows her German, and her German literature. I was reduced to the simple, "but I like this one!" and in la Caterina's absence, prevailed. I have often regretted not yielding to the book buying impetus, but cannot remember having ever regretted yielding to it.

And, a little research found the translator Bayard Taylor to be of some interest; as recently as 1972, a Master's Thesis could say of Taylor::

A man of no small ego or ambition, Taylor aspired to greatness as a poet and produced a considerable quantity of lyrical verse characterized by technical proficiency and the sort of liberal ideas which were considered safe in the New England of his time. Today most critics agree with Richard Henry Stoddard's assessment that Taylor was a versemaker and not a poet, and he is remembered chiefly for his 1871 translation of Goethe's Faust, which even now is considered by many the most accurate English translation of the great German epic. Taylor has often been given the dubious title of poet laureate of the Gilded Age, for he reflected in his work the homely sentiments, the common goals, and the self- satisfaction of his readers.

A recent study of Taylor's life and work highlights the translation's basis in a strong identification with Goethe and his themes, and a strong desire to replicate his poetic meter faithfully.

Well, "homely sentiments, common goals, and self- satisfaction" sounds about right for translating your average German, but the mighty Goethe...hmm.

Now, dear, I only said that rhymed verse translation usually sacrifices some accuracy and nuanced word choice to the "tyranny of verse" as dear M. Proust said, and not always with the benefit of "forcing the poet into the discovery of his best lines" (well, ya can't always be right, Marcel, and for all I know that's not even a good translation of YOUR line.) Oh, and that la Caterina would kill you if you bought the Blake set.

I stand by both statements and felicitate you on your purchase.

I think it was Taylor's translation that I read in high school English (circa 1972), if the Google images of paperbacks from that time are right. In college I began German, and Kaufman's parallel text was very welcome. I found it, then, more to my taste than the less playful Taylor, but I've never understood how Kaufman's distaste for the Second Part could justify leaving most of it out of his translation.

I don't think I qualify as a collector, but a handsome edition is always appreciated. If you don't already have it, and are a great Faust-tradition fan, I'd recommend the Folio Society's version of Marlowe's Doctor Faustus. Another particular treasure is a 1981 edition of the 1587 Faustbuch, "Historia von D. Johann Fausten," published by Drei Lilien Verlag out of Wiesbaden, with strangely bizarre illustrations by Heinz Zander. All the fiendish elements, bookended with pious reflections.

Karen, no slander intended. My sincere apologies if I misrepresented you. PLEASE DON'T MAKE ME DO ANOTHER COAL-MINING CHAPTER!

Rick, thanks for the recommendations. I would love to get a good reading copy of the Faustbuch. I have the Folio of Marlowe--and it's lovely. I'll report back in as I read the Taylor. Thanks for the comment!

(Why do I have to take a CAPTCHA test on my own frakkin' blog?)