In Times of Drought

I'm leading a book study on Julian of Norwich, and, was much struck by this passage, where she gives highly practical and reassuring advice on how to surmount a dry spell in prayer:

Full glad and merry is our Lord of our prayer; and He looketh thereafter and He willeth to have it because with His grace He maketh us like to Himself in condition as we are in kind: and so is His blissful will. Therefore He saith thus: Pray inwardly, though thee thinketh it savour thee not: for it is profitable, though thou feel not, though thou see nought; yea, though thou think thou canst not. For in dryness and in barrenness, in sickness and in feebleness, then is thy prayer well-pleasant to me, though thee thinketh it savour thee nought but little. And so is all thy believing prayer in my sight. For the meed and the endless thanks that He will give us, therefor He is covetous to have us pray continually in His sight. God accepteth the goodwill and the travail of His servant, howsoever we feel: wherefore it pleaseth Him that we work both in our prayers and in good living, by His help and His grace, reasonably with discretion keeping our powers [turned] to Him, till when that we have Him that we seek, in fulness of joy: that is, Jesus.

This is helpful to me when, as now, I'm feeling a bit burned out, what with work and other tasks I've taken on, and, after a truly vicious cold/flu thing, depleted. Dame Julian is considerably more inspiring than the AA slogan that tries to make the same point: "Fake it Til You Make it."
Posted by Anglocat at 8:47 AM No comments:

Just a short note to comment Father Tobias Haller who is leading a spirited discussion on the "presenting issues" and is engaging productively with Fr. Matt Kennedy, in addition to those more sympathetic with Tobias's own views.

For once, this kind of discussion is generating more light than heat.
Posted by Anglocat at 4:53 PM No comments: 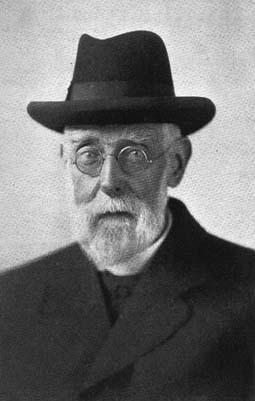 I'm currently reading
Belief in God (1921), by Charles Gore, written after retiring as a bishop. After his somewhat stormy years as a controversialist, and a disciplinarian--Gore questioned the suitability for ordination of H. Henley Henson and William Temple, who rose to be Bishop of Durham and Archbishop of Canterbury, repectively--Gore in retirement returned to his first great love--bridging the gap between modern thought and the Gospel.

Belief in God is the first volume of a trilogy--Belief in Christ (1922) and The Holy Spirit and the Church (1924)--were reprinted under the title The Reconstruction of Belief (1926), and that's the edition I have. From the very first page, it's the bracing, free-thinking Charles Gore of Lux Mundi (1889), seasoned with experience. When I say free-thinking, I do not mean unorthodox; more often than not, Bishop Gore was a staunch defender of creedal orthodoxy. His liberalism comes in his belief in freedom from unthought-through shibboleths, whether traditional or modern:

The only satisfactory way for a man to save his own soul, or to become capable of helping others, is freely to use his own real judgement and accept the responsibility of decision in the fullest light that he can can see by. Deliberately to enter upon this process of reconstruction from the beginning does not, of course, mean the abandonment during the process of the religious beliefs and practices which a man holds, already in use. Quite the contrary. He will make the most of the precious gift of faith, even while he is enquiring into its basis. It is part of the experience which he is to interpret. It gives him his understanding of the questions at issue.

Gore waxes authbiographical here, sharing his own progress in faith, and the nature of his own faith. He points out the draw of faith comes in many styles, and in this passage describes his own journey to Anglo-Catholicism:

I have since my childhood been what I may call a Catholic by mental constitution. I remember very well, when I was eight or nine-sixty years ago-reading a book by a Protestant author-a Presbyterian, I think-entitled Father Clement, about the conversion of a Catholic priest to Protestantism. I have never read it since. I had been brought up in ordinary old-fashioned English Church ways. I had only attended very Low Church services. I had never heard of the Oxford movement. I knew nothing about Catholicism, except as a strange superstition, called Popery. But the book described confession and absolution, fasting, the Real Presence, the devotion of the Three Hours, the use of incense, etc., and I felt instinctively and at once that this sort of sacramental religion was the religion
for me. From that day most of the people who influenced my intellect, when I was young, were agnostics or Protestants or "outsiders" to the Catholic faith-Carlyle, Ruskin, Edward Bowen, T. H. Green-but this predisposition remained quite unaltered.

I am remided here of the great line from Robertson Davies's novel The Cunning Man--that "you must find the church that you can stand, and that can stand you."

Gore's defense of creedal Christianity is not "stiff" (as he feared), nor cold--it is a serious exploration of faith from the personal point of view of one of Anglicanism's true greats.
Posted by Anglocat at 4:32 PM No comments: