The release of Go Set a Watchman isn't until next week (July 14, to be precise), and it's already controversial. From the New York Times review:

We remember Atticus Finch in Harper Lee’s 1960 classic, “To Kill a Mockingbird,” as that novel’s moral conscience: kind, wise, honorable, an avatar of integrity who used his gifts as a lawyer to defend a black man falsely accused of raping a white woman in a small Alabama town filled with prejudice and hatred in the 1930s. As indelibly played by Gregory Peck in the 1962 movie, he was the perfect man — the ideal father and a principled idealist, an enlightened, almost saintly believer in justice and fairness. In real life, people named their children after Atticus. People went to law school and became lawyers because of Atticus.

Shockingly, in Ms. Lee’s long-awaited novel, “Go Set a Watchman” (due out Tuesday), Atticus is a racist who once attended a Klan meeting, who says things like “The Negroes down here are still in their childhood as a people.” Or asks his daughter: “Do you want Negroes by the carload in our schools and churches and theaters? Do you want them in our world?”

"Go Set A Watchman," a follow-up to Harper Lee's "To Kill A Mockingbird." Credit HarperCollins
In “Mockingbird,” a book once described by Oprah Winfrey as “our national novel,” Atticus praised American courts as “the great levelers,” dedicated to the proposition that “all men are created equal.” In “Watchman,” set in the 1950s in the era of the Brown v. Board of Education decision, he denounces the Supreme Court, says he wants his home state “to be left alone to keep house without advice from the N.A.A.C.P.” and describes N.A.A.C.P.-paid lawyers as “standing around like buzzards.”

In “Mockingbird,” Atticus was a role model for his children, Scout and Jem — their North Star, their hero, the most potent moral force in their lives. In “Watchman,” he becomes the source of grievous pain and disillusionment for the 26-year-old Scout (or Jean Louise, as she’s now known).

Cue the consternation of the legion of Atticus admirers, some of whom speak of boycotting the new book to escape disillusionment. No, really. I'm not kidding.

The story is news--big enough that it has the prime real estate in this morning's paper: 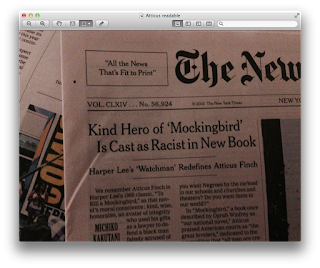 I am going to push back against my fellow Atticus admirers, here. Historically, a great many of those who championed legal equality reflected in their lives the racism of their times--Hugo L. Black was a member of the Ku Klux Klan in his youth; Abraham Lincoln was, as Frederick Douglass said, by turns "emphatically, the black man’s President,” in fact, “the first to show any respect for their rights as men,” and, alternately,“preeminently the white man’s President.” Douglass noted that both views were true.

Harper Lee struggles with this in Go Set a Watchman, and I'm glad of it. It adds a layer of nuance, of realism that the child's eye view of To Kill a Mockingbird can allow us to obscure. It's easy, but facile, to treat Atticus as a plaster saint among sinners. But hold on. In Mockingbird itself, most of the characters are flawed--Miss Dubose (the "wicked old hell-cat" as Scout calls her, before weeping for her), Uncle Jack, Aunt Alexandra, and, yes, Atticus himself. The noble lawyer portrayed by Gregory Peck is there, but there are indications of depression, of bewilderment in his widowed status, in the younger Atticus. And yes, he can be patronizing toward his social inferiors. Just ask Bob Ewell. Or Mayella.

My copy of the book hasn't arrived yet, and I look forward to reading it. But I don't start off from the place that a depiction of a flawed, even morally tainted, older Atticus is by its nature a bad thing. If it is done well, it can enrich the character of Atticus profoundly, allowing us to see him more in the round. A very Trollopian view, frankly. As I said at the Trollope Society's Annual Dinner this year:

Trollope influenced my own view of human nature more than his more pyrotechnical peers, more than the writers of my own era, who all too often seemed to me to oversimplify, to not quite get it.

From him I learned that we are none of us just our worst moments, and that we cannot live on the summit of our best moments, either.

Phineas at Bay is a thank you to the great psychologist who taught me about human nature, who gave me the understanding to endure the myriad small betrayals and wounds we experience from those who love us both before and after they hurt us--and to forgive them, and accept forgiveness for the hurts we have inflicted in our own turn.

And people surprise for good as well as for bad.

We cannot be reduced to our worst moments. Or even our best.

Add Atticus Finch to the roll of Trollopean heroes--too complex to reduce to a cardboard figure of nobility, more alive than that.

Good on Harper Lee for challenging us to look the complexity of human nature in the eye--to risk her "brand" and offer us a more complex, difficult reality.