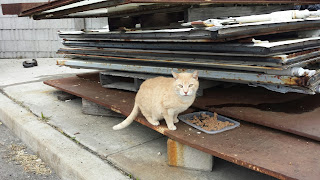 The life of a feral cat tends to resemble that in Hobbes’s description of life in the “state of nature”: “solitary, poor,nasty, brutish, and short.” A feral cat, or, as the ASPCA calls them, a community cat's average lifespan is less than two years if living on his own. In a well managed cat colony, they may live as long as ten years.

So the cat colony run by la Caterina and her ragtag band of rebels--er, elegant and compassionate women--whose love of these little guys has extended for many years (la C has been involved since the summer of 2010, and the colony predates her by some years), have given these animals an extended lease on life. In fact, two of the cats we had in out backyard before we moved to Brooklyn, Chauncey Gardiner and Bernie (for Bernard Shaw), are still with us.

Many of these cats are the classic "community cat"--skittish, stand-offish, with a wild streak deep within them. But surprisingly many become what the colony helpers call "friendlies," and will come up to you for affection--my departed friend Katy No-tail would cuddle with me for up to a half hour.

Some even transition to indoor cat status--our little Ninja Kitteh has been inside longer than she was in the wild, and although she has the tipped ear of a colony cat (don't judge; that cropped ear says to every animal shelter this cat has people who care about her and want her home).

Our feline friend Catsky, pictured above, was about ten years old, and went missing a little while ago (they sometimes do this general), but was found dead today by his favorite person, Kerin. Catsky was very sweet; I knew him only a little bit, but was allowed to pet him. La Caterina and Kerin (who was so loved by him that she could pick him up, which even my Giles never liked), knew him and loved him much longer and better.

Catsky was a beautiful, calm cat, with a sweet disposition. He was very loved by all of the colony's helpers, but, I think, by none more than Kerin.

When you hear someone dismissively referred to as a "cat lady," or wonder why people with demanding jobs and other time pressures would run around a cityscape leaving food and water, even through the depths of winter, cleaning dishes and shelters to make sure that their charges are healthy and comfortable, think of this: A decade's worth of of love.

The reward dwarfs the work, and even the sadness in the wake of loss doesn't take away those years of friendship with animals to whom everyone else in the world may be potential danger--but their people are loved in return for the love they give.
Posted by Anglocat at 7:01 PM