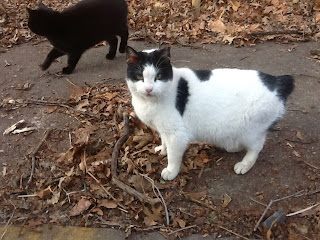 This is my favorite picture of Katy, who I nick-named Katy No-tail, when I first met her. She was a feral cat, about five years old, we think, and when I would accompany la Caterina to the Navy Yard Annex cat colony (in a run-to-jungle square of what were once handsome old buildings), four cats would regularly run out to greet us: Chauncey Gardner (who had been in our backyard for several years before we had to move), Black-eyed Susan (so named for a ring of black fur around her right eye), Midnight (one of the few pure black cats in the Annex), and Katy. Chauncey would always greet us as one clubman might greet another--affectionately, amicably, but not effusively. Black-eyed Susan was exuberant, until the food was set down, and then might-might-deign to let us pet her. Midnight? Beautiful, truly, but not terribly affectionate. Friendly, but reserved.

Katy adopted me quite quickly, and over the three years (hard to believe it's been so long, but there you are) that we have been caring for these cats, has become increasingly affectionate. Oh, she loves the other cat wranglers--Mary, Queen of Cats and she have a thing going, and la C can pick her up. But after she eats, Katy seeks me out for a snuggle. She wreathes her little body around me, if I sit in the grass, and rears up to place her paws on my leg, contemplates being a lap cat, and--no, she's off again, snuggling her way around on another orbit of me, accepting pets until it's all too, too relaxing, and she flops down next to me, and purrs. We can spend a half hour doing this, amongst the beauty of the ruins dotting the Annex.

Katy lost her tail because, before she was in a safe space (the Navy Yard) she was in a warehouse, and her tail got caught, and festered and had to be amputated. She was also quite, quite deaf.

As I'm reading what I just wrote, I see a lot of it is in the present tense. But Katy died yesterday. She had kidney failure, and other complications, and, as la C and I were leaving the DC area, we got a call from Mary, who told us the bad news: Katy had to be put down. And yet, I will leave this post in the present tense. Because, as T.S. Eliot wrote, "Time present and time past/ Are both perhaps present in time future,/And time future contained in time past.

And so somewhere, Katy and I are enjoying a snuggle on the leaf strewn grass, among the ever crumbling, but never-crumbled buildings, and always will be.

Which will not stop me missing her.
Posted by Anglocat at 8:48 AM

"'Oh, nothing.' He laughed and jumped to his feet. 'Come on!'
'Where?' said Pooh.
'Anywhere,' said Christopher Robin.

So they went off together. But wherever they go, and whatever happens to them on the way, in that enchanted place on the top of the Forest, a little boy and his Bear will always be playing."