The Cat Who Came in From the Cold: A Memorial 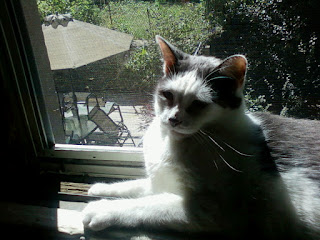 That's my favorite picture of Giles T. Katt, the cat who came in from the cold. Literally.

You see, back in 2000, I moved for a few years back out to Nassau County, and rented a back cottage (in this town, most of the properties had a main house and a smaller cottage in the rear). The cottage was two stories, and, while compact, quite cozy (The main property was rented to a woman and her daughter). Our next door neighbor, an elderly man, had let his cottage go to ruin, and it became what I called "Kittycat Central"--a gathering of all the feral cats in the neighborhood. My ex and I took to feeding them, and one in particular, a handsome young adult grey-and-white cat whom she called "Oliver" was a regular.

In the winter of 2001, the weather report warned of a blizzard, and so I made a frantic trip to buy groceries (the cupboard, while not quite bare, was pretty sparse). The snow began as I headed out, and was falling in earnest by the time I got back. As I finished unloading the car, the front door to the cottage propped open, in walked the grey-and-white cat, an unneutred feral male, leading a small group of kittens behind him. This is, in case you didn't know, not typical of unneutered feral males. The grey-and-white led the kittens in, found a corner of the cottage (right by the stairs) where the wind wasn't blowing, and settled the kittens in, molding them into a pool of fur, to share their body heat. He then lay down in front of them, crossed his paws (a gesture I was to see repeated for many years, had I but known it), cocked his head at me (ibid.), and shot me a look as if to say, "It's cold out there, mate. Let us stay, there's a good chap?"

How could I not?

And how could I not keep that cat?

I renamed him, for reasons that I think are obvious, Giles, and never has a cat been better named. When fights broke out among the kittens, Giles would protect the weaker cat, rearing up on his hind paws, and boxing the aggressor; when a cat came back from the vet, and other cats were shunning him or her, he would trot up to the sick cat, snuggle him or her, and reintegrate that cat into the family.

Later, when La Caterina and I joined our lives and households, her three cats (Elvis, Betty and Buster) and mine (Giles, Ethan, and Elspeth) had to find a modus vivendi. Giles formed a pact with Elvis, the Comfort Kitty, and together they enforced decency, fair play, and kindness.

Elvis is gone three years now, so too is Buster, whose relationship with Giles reminded me of the sometimes affectionate rivalry between the Ainley Master and the Fifth Doctor.

He started losing weight a couple months ago, and la C took him to the vet, whose treatments seemed at first to be helping. Then, a little over a week ago, la Caterina told me the vet had informed her that it was time to put him down. I drove down against some of the worst traffic I've ever faced--the trip took nearly double its usual length, but we got him to the vet--only to be told he was very slightly better. When la Caterina came upstate for Christmas this year (I'd had to come up early for a funeral), she brought Giles. He seemed weak but not unhappy during her visit, but was eating less and less. He cuddled a great deal with me, with la C, and her sister, who came up to be with us.

Last night, his respiration changed, into a wheezing groan, and he ate nothing. He joined me in the bed, and pressed against my side all night. Betty, normally quite territorial about the bed, looked at him intently for a moment--and then joined us. For that one night, Giles was lovingly enfolded by not just me, but by Betty, the last survivor of la C's litter.

This morning, his breathing was worse, and he took just two small licks of food. I made an emergency appointment with the excellent vet up here, and brought him in. The news couldn't have been more dire: Tumors were closing off his breathing, surrounding his thyroid, and in his abdomen.

I won't say any more of what passed when Giles and I were alone together, or when the Doctor joined us, and gave him the anesthetic that gave him his release. I did my duty to the finest cat I have ever known, and that is all.

But I will add this: As he drifted into sleep, I whispered into his ear, "Thank you. Thank you for choosing my door."

You are a great writer and a better man. My condolences.

Ah, my darling friend, You gave this glorious cat a safe, lovely and loving home for the rest of his days. He returned your grace with his own love and kitty wisdom. You are both better for having had each other. My love and condolences.

Ah, my darling friend, You gave this glorious cat a safe, lovely and loving home for the rest of his days. He returned your grace with his own love and kitty wisdom. You are both better for having had each other. My love and condolences.

Very moving -- I love the realism of it. I wanted to adopt a feral cat this year but discovered it is owned by someone else who neglects it. I did adopt one many years ago in Leeds, England, but was unable to bring it back to the States with me. You and Giles were lucky in that your situation enabled the both of you to stay together -- and all those cats and kittens Giles befriended.

Thank you so much, Carrie, and you too, Ellen. Anon, you are, as always, too mind.

Too Kind. My typos grow ever more weird.

I haven't any word to appreciate this post, Really i am impressed from this post the person who create this post it was a great human, thanks for shared this with us.
Screen Protector