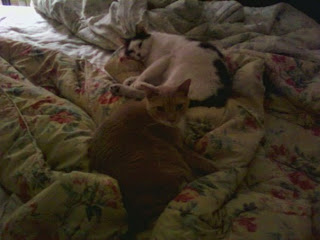 When La Caterina and I came together at last, we each had three cats. I brought Giles, Ethan and Elspeth into the family, she brought Elvis, Betty and Buster. We lost Elvis last May, at 15. Now his litter-mate Buster has gone to join him.

Buster was our wild child--a yowling nuisance at times, affectionate and clever all the time. He would strand himself in a high place so that La Caterina would have to rescue him. He would insist on being picked up by me, knead my shoulders, often sinking his claws luxuriantly into my shoulders. (My heavy wooly bathrobe soon made that more bearable.) When we moved from Queens to Brooklyn, he burst the cat carrier in a scene that only James Herriot could do justice to.

A little over a month ago, I was celebrating Buster T. Katt's flash of his old style and diablerie in catching a mouse (a big one, too), and strutting through the apartment to the front door.

I was delighted to see that he remained what La Caterina and call "a cat among cats"--that is, still holding his place in the herd. Or the pack, or a pride, whatever a gathering of cats is called. Gaunt from causes our vet couldn't specify, he had nonetheless maintained his élan.

He even seemed to have put on a little weight two weeks ago.

He had to be put to sleep yesterday.

On Saturday, I noticed he had lost all the weight he had gained, and some, and that he was less agile than previously Still, he managed to get from the floor to the chair, the chair to the table, and the table to the back of the bench--just the right hope to walk across the thin rail atop the bench, and step onto my shoulders, as he has long loved to do, and purr in my ear as I caressed him.

But he was terribly light.

Wednesday, while I was upstate, he crashed--a necrotic mass in his mouth became evident, and he lost all energy. I came home the next morning, and got back at 2:00 pm, just in time to take him to the vet. La C and I knew the outcome, of course, but when the vet tech hazarded a guess that it might just be his teeth, an unrealistic, idiotic, hope flared in me.

I knew better, of course. I picked him up (the mass stank horribly, but he wanted a pickup one last time, and damned if I was going to disappoint him). I held him until the vet came, and then after she confirmed he was terminal and it was time, I held him on my shoulder while they prepared.

Enough. I won't harrow you with the details. The vet did what had to be done, and I spoke to him, my face against his, nose to nose, so that he knew he was not alone. He slipped gently out of life, and into the next life.

In The Great Divorce, C.S. Lewis describes a visit to Heaven, in which he is chaperoned by George MacDonald, a Nineteenth Century novelist who was his teacher in many ways. they meet a woman in heaven, woman, trailed by a great throng of people, but also animals:

Is it?...is it?” I whispered to my guide.
“Not at all,” said he. “It's someone ye'll never have heard of. Her name on earth was Sarah Smith and she lived at Golders Green.”
“She seems to be...well, a person of particular importance?”
“Aye. She is one of the great ones. Ye have heard that fame in this country and fame on Earth are two quite different things.”

“And how...but hullo! What are all these animals? A cat-two cats-dozens of cats. And all those dogs...why, I can't count them. And the birds. And the horses.”
“They are her beasts.”
“Did she keep a sort of zoo? I mean, this is a bit too much.”
“Every beast and bird that came near her had its place in her love. In her they became themselves. And now the abundance of life she has in Christ from the Father flows over into them.”

Aye, that'll be La C, and so I am sure that Buster and I will meet again. But it is hard to say goodbye.
Posted by Anglocat at 5:33 PM