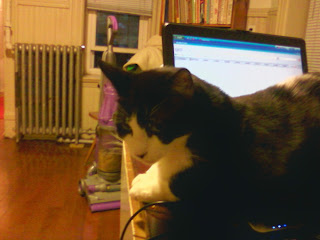 When la Caterina and I came together, she had four cats--Mama, Buster, Betty and Elvis. Mama died not so long afterward, but her kittens (actually 7 years old by that time) joined my cats (also around the same age, or a little younger) in the Brady Bunch of the cat world.

Elvis, pictured above (click to embiggen, as they say on the Intertubes), was the friendliest of the Catherine Collection. He and Giles worked out pretty quickly that Giles would be the Sheriff, and Elvis the diplomat. Elvis groomed all the other cats, and liked nothing better than snuggling with his people, or his fellow cats, or both.

We called him "the Comfort Kitty" because he had a sense for who was down, and would move his big, bulky, but inexpressibly soft presence, and snuggle for as long as you wanted. We used to joke that Elvis was like a gas--he expanded to fill all available space.

When we moved from Queens to Brooklyn, and Elvis acquired a set of stairs, he started getting more exercise, and lost a bit of weight. Good, we thought--because he was quite big. Nero Wolfe as a tuxedo cat, with a better disposition.

But a few weeks ago, he seemed to lose more weight. So we took him to the vet--just to be sure. The vet was concerned; she felt a mass in his abdomen that shouldn't be there. So we had an ultrasound done. In the time between appointments, he went from 13+ pounds to 12. He had a large tumor that could have been resected, we were told--but the lymph nodes were already affected. Under those circumstances, and in view of his age, we felt that surgery would be cruel.

The descent was unbelievably quick, though--from May 20 to today, he grew worse daily. As late as Thursday, though, he climbed into bed for a snuggle with me, as I lay doing proofs. This morning, though--we both knew.

The vet tech knew him, though his usual vet was off today, and we stayed with him till he was gone. I write these words having just returned home. The worst part about having pets is that we have to say goodbye so soon. But after eight years of love, I'd rather bear that wrench than deprive myself of the joy the Comfort Kitty brought to my life. And I know that he is gathered to his Maker.