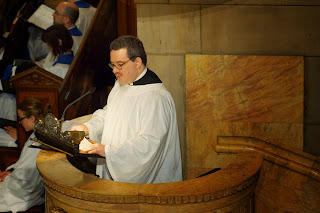 Edited to Add: All of the Meditations are available now, and they are all worth a listen/read. I greatly admire all of those I was so fortunate to share the pulpit with.]

“When Jesus therefore saw his mother, and the disciple standing by, whom he loved, he saith unto his mother, Woman, behold thy son! Then saith he to the disciple, Behold thy mother! And from that hour that disciple took her unto his own home.”

Mothers and sons. For Mary and Jesus, in Facebook terms, “It’s complicated.”
When Jesus is arrested, the disciples scatter.

We don’t know what most of them do, but we know this—at some point the next day, maybe at Jesus’s trial, his sentence, or at some point in that horrible forced march to Golgatha, one of the disciples steals back, and joins the handful of women close to Jesus at the foot of the Cross.

He is there for the death vigil, helpless, unable to intervene, unable to do anything but watch his teacher, his friend, his hero, slowly die, hoping that his presence provides some comfort to Jesus.

Also there, we are told, is Jesus’s mother.

We don’t often see Mary in the Gospels, after the childhood of Jesus. After the Nativity, we get a glimpse of her when Jesus disappears, and is found in the Temple, and she’s in the background when Jesus returns to Nazareth, only for Jesus to describe as his mother and brothers those who have chosen to gather around him to hear him speak.

In each of these stories, Jesus is not exactly an easy son to have, right? It’s complicated.

And that makes sense, in a way. Jesus is terribly aware that time is short. There is a sense of urgency in him, which makes sense, especially after John the Baptist, his own mentor and cousin is first imprisoned and then executed for confronting the authorities with truths they’d rather not face.

Jesus is doing the same thing. Walking the razor’s edge that so many prophets and teachers had walked before him, only to be sliced up on the cutting edge of reality. Only to be put to death. Jesus is living a dangerous life, one that doesn’t give him a lot of scope to be a good son or brother. And so we only see his mother occasionally.

In the Fourth Gospel, we see her twice.

At the very beginning of Jesus’s ministry, she calls him into service at the Wedding at Cana; when the wine runs out, she simply turns to her son, and expects a miracle. Mothers never change, do they?

Nearly two thousand years later, Jesus’s reply is still spontaneous--if anything, a little flustered: “Woman, what concern is that to you and to me? My hour has not yet come.” She ignores him, of course, and he rises to the occasion. (Jn 2:1-5). Mary gets her miracle, one that saves an important social occasion, and launches Jesus a bit prematurely on the world stage, before he felt his hour had come.

Now, in Mary’s second and final appearance in this Gospel, Jesus’s hour has come, and gone; the Hour of Darkness has overtaken him. (Luke 22:53) As she was present for the beginning of his ministry, she is here for the end.

There are many theological interpretations of this moment. Let’s not go there today. They are too easy. This moment asks—no, demands—more of us.

This is a moment when Jesus, his endurance breaking, completes one last task, the most human one of all, in a way.

Remember that he is dying an agonizing death, branded a rebel, a blasphemer, an outcast both from the Roman political order and the community of faith in which he was raised.

Remember too that the families of outcasts and rebels were often shunned in that era—guilt by association is no modern invention.

Add to that the fact that Mary, as a widow--we must assume she is a widow, because no mention of Joseph exists after Jesus reaches adulthood--would likely be dependent on the goodwill of her neighbors and friends of the family—goodwill that dies with Jesus, almost certainly.

So Jesus is, in his last moments, entrusting his mother to the one disciple who, after fleeing with the others, has been drawn to the foot of the Cross.

The disciple known in this Gospel only as the “beloved disciple,” but named by tradition as John, the Son of Zebedee.
And Jesus creates of these two mourners, there to be with him for every moment they can be, a new family. Because he does not just entrust his mother to John. He names her as John’s mother, names him as her son.

A passing on of duty, yes, but more than that, much more than that; from the ashes of his own family and his now-shattered circle of disciples, Jesus has created a family born not of blood-ties, but of love.

The given family and the chosen family—what Armistead Maupin might call the "biological family" and the "logical family"—have merged.

Jesus has given each of them the only form of comfort there can be to assuage the pain of their loss—he has forged a new loving relationship in which Mary can comfort and care for the mourning disciple even as he does the same for the mourning mother.

She remains a mother in the present tense, he becomes not Jesus’s disciple alone, but his brother by adoption. It is an act of spontaneous kindness, by a man in his death-throes. And it is of a piece with his entire ministry—even as his last breath draws near, Jesus acts, within his rapidly shrinking compass, in love.

No miracle, this time; no water into wine. No happy ending.

But something has been salvaged from the wreck, because those who loved him so deeply are given a way to continue in that love, each by caring for the other.

The very next line of the Gospel tells us that “After this,” “Jesus knew that all was now finished.” This is the end of his ministry, and so a little theology creeps in, uninvited, after all.

Because we are all called to do just that—to take our cue from John and Mary, who are not free to focus only on their own private loss, but are called to care for each other.

Because, even as Jesus is about to die, the survivors are being shown a way forward. The sun has not yet even fully set on Good Friday, but the first hints of the Easter sunrise are mixed with the dying of that light.
Posted by Anglocat at 4:34 PM