An Echo in Time

Today, I attended the wedding of one of my cousins, and, as at all gatherings of my mother's side of the family, got to spend time with a wide variety of cousins, aunts, uncles, many of whom are more dear to me than they probably know. Blessings on the wedding couple, and many years of happiness to them!

But that is not, surprisingly the subject of this post. The reception was held at the Nassau County Bar Association, with the main event being held in the newer ballroom, but the cocktail hour in the older, medieval inn-style hall making up part of the original building. The rear of the main gathering hall is decorated by several banners, and, as I perambulated around with my plate, I saw that at the left of one, was a plaque: 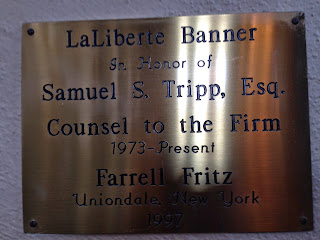 Ah, me! Farrell Fritz, or,as it was when I knew it, Farrell Fritz Caemmerer Cleary Barnosky Armentano, is a large, prestigious firm in Nassau County, and when I graduated from college in 1987, on the way to Columbia Law School, I was offered a summer job there. I worked primarily with the late John Cleary, doing some grunt-work on tax certiorari cases, and learning one hell of a lot about how a good lawyer performs; John was even-tempered, thorough, methodical. I should also add that he was extremely kind, and while my work for him could be tedious (in those pre-computer records days,most of what I did was summarizing data relating to property values), he made me feel as though I was an integral member of the team. Let's be frank; I'm pretty sure I was a decent intern, as interns go, but I really doubt that I added much value. John Cleary was too kind a man to let me know that, though, wrote a great affidavit urging my admission to the bar, and I honor his memory.(Dolores Fredrich took me under her wing, too, that summer, but I digress.)

Farrell Fritz was a welcoming place for me, but I was especially fond of Sam Tripp. He was, or so he seemed to me, a hale, but even then an old man--his book, A Guide to Motion Practice Litigated Motions in the New York Civil Courts came out in 1946, and that was a good 40 years before I met him. He was interested in talking about the law, studying the law, and, most of all, knowing the law. He had a cabinet filled with index cards, summarizing every decision rendered by a court in New York since the day of his admission to the bar, organized by topic, and added to even when I knew him. Sam used the New York Law Journal, the reporters, and the unpublished decisions which would be sent around lawyer-to-lawyer, and updated his cards regularly in handwriting that I can only call spidery, even though it's a cliche.

I admit it, I loved listening to Sam discourse on law and legal practice, which he viewed as an art--truly, as one of the humanities. He subscribed to the Harvard Law Review, which he extolled to the skies, praising its scholarship, its utility in apprising the bench and bar of the best legal thinking, current trends, and, most of all, the roots of the law. He praised it so emphatically that, at the end of one of his rhapsodies, I remember exclaiming, "Sam, you've sold me! When I graduate I'll subscribe to the Harvard Law Review!"

"You will do no such thing," Sam shot back severely, his mouth pursed in a rare disapproving frown.

"Why not?" I asked, bewildered.

"Loyalty. You're going to be a Columbia man. You will subscribe to The Columbia Law Review."

I grinned, getting his point: the institutions that shape us deserve our affection. Yes, I grinned.

And for about 15 years, I subscribed, too, and read each issue. And now, confronted with that reminder of a man who was good to me for no reason other than he could be, I feel guilty that I haven't of late years, because, after all, the content is largely openly available on the web.

Sam would not, I suspect, approve.

But he might, I think, like that I gave one of my characters in Phineas at Bay his card-catalogue, his life-long project of creating an encyclopedic summary of jurisprudence as a whole. More than that, I gave that character Sam's love of the law, even in all its most seemingly dry manifestations. Because I got it from him.
Posted by Anglocat at 8:41 PM

I was about to say - haven't I met this man recently, in a novel about an Irish-born M.P. who's conducting a legal battle and consulting the card catalog maintained by his benignly crusty old pupil-master?

Why yes, in part, you have.

I leave the following comment: My two favorite writers on culture are Mr. Wirenius and Frank Rich.