If we're lucky, we have mentors in our lives. I've had several, but, in shelving some books (and highsmithing--that is, covering the dust jackets with transparent plastic sheeting to protect them), I ran across a very tangible memento of one of my law school mentors. Charles L. Black was a brilliant scholar. He was a poet. He was also passionately committed to the U.S. Constitution and its ideals. Professor Black was awe-inspiring until he lured you into relaxing; he was available to students in ways that had nothing to do with grades:

After Louis Armstrong died in 1971, Black held an annual "Armstrong Evening" at Yale. He spun 78 r.p.m. records from the 1920s and 1930s and shared reminiscences with the students who were delighted to take over the faculty lounge for this memorable event.
Students also learned from Black's wonderful mix of down-to-earth practicality and dreaminess. As he put it, "We talk about the protection of our fellows from the suffering and indignity of want as though it were a matter of taking Mount Rainier under one's arm and jumping over the Pacific Ocean, when in fact it is a matter of deciding whether or not to help a frail person lift something that we can ourselves lift."

I attended some of those evenings, and was introduced to the early Armstrong--the Hot Five and Hot Seven years, especially. Law came up incidentally; class not at all. It was education in the deepest sense of the word. (To understand the importance of Louis Armstrong to Professor Black, read his My World With Louis Armstrong.)

Much of my pro bono work, and my scholarship, has been impacted by this man and his teachings. As the linked article quotes him, Professor Black "learned the instrument at the age of 10 from a 75-year-old former slave named Buck Green, who, he would say, 'still plays harmonica through my mouth.'" I can't claim that level of connection. But Professor Black's world view changed mine, and I take pleasure in referencing his work, because the deeper debt cannot be acknowledged--some of what he taught me is so mixed into my own thinking that I'm not always aware when a notion of my own is shaped by him.

So, this memento? One of Professor Black's works, The Humane Imagination (1989). A series of articles he wrote about law as justice, law as art, the roots of law. Only Charles Black could find poetry in admiralty law. Or, in "My World With Louis Armstrong," make the spiritual dimension of the law, its occasional opportunity to aid human growth and even redemption, sing. Anyway, I asked him to sign my copy. Here's what he wrote: 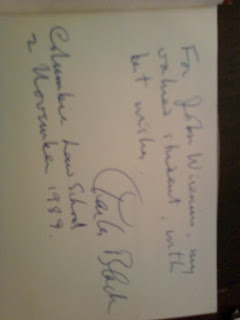 He valued his students, and I value him to this day.