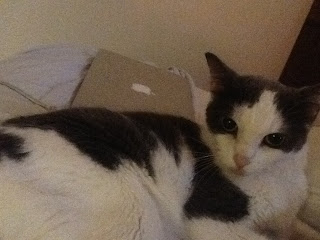 "“My heart has joined the Thousand, for my friend stopped running today.” --Richard Adams, Watership Down

The little devils came to my door. I know it sounds like a setup for a joke. But it's true, mind you, and how I became a cat fancier on the epic scale. A group of kittens led by Giles, the Cat Who Came in From the Cold came to my door, and I kept two, and found homes for the rest. But a week or so later, I found two very small kittens outside, on a the stump of a tree. Then my three cats and la Caterina's three (Elspeth, Betty, and Buster) became a pride with mine. Elvis and Giles kept the peace until such time as the cats all saw each others as siblings and friends.

Over the tears, we have lost them, all but one of them, Elspeth P. Kitten. She has been with me nearly 19 years. Nearly 8 years ago, she survived a bout of hepatic lipidosis (la C was excellent at frae-feeding her, and even I could do it, having been her person since kitten hood). She made a full recovery, and resumed her ornery, lovable ways.

In some ways she was always a kitten--she used to curl up against me, jam her tail into her mouth and nurse while kneading me.

Elspeth was our mouser, once excelling herself by launching herself through the air on a moonlit night, and bringing down a bat on the wing--and was widely rumored to be a witch. (Just ask my sister in law!)

You know where this is going; we lost Elspeth today. She'd become a little thin--but not dangerously so. She had trouble with her eye, and her third eyelid, more precisely called her "nictitating membrane." But she seemed, mostly herself. But I was worried, and la C brought her up for a vet visit. I brought her in this afternoon, to the good vets of Sand Creek Animal Hospital and was informed that her third eyelid was inflamed because she couldn't blink. And she couldn't blink because she had a facial nerve paralysis. The result of either a stroke or of a brain tumor.

Once again, I had to say goodbye.

I stayed with her till the end, holding her and petting her. I had been the first person to care for her, and I was the last. La Caterina, who was such a good kitten mama to her, couldn't be with us, and it couldn't wait. So I held my dear friend, that soft, soft fur against my cheek one last time.