In The Castle of the Forest Sauvage 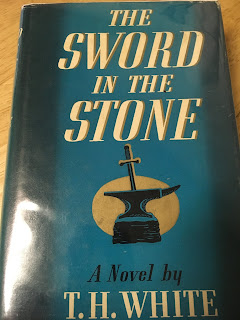 An older boy, leading his foster-brother, angrily tries to fly a hawk, who flaps away, itself in a mood. The hawk will not be taken willingly, and heads deeper into the dark, frightening forest near the boys' home, the Forest Sauvage. The older boy, angry at himself, his brother (who warned him), and the hawk, storms off home. The boy follows the hawk into the depths of the Forest Sauvage, and pursues, even as the shadows lengthen.

As a better writer than me once put it, " I really didn't know. I wasn't sure. You lose sight sometimes. Thank you!"

I've been revisiting T.H. White's original, uncut, unblemished, "fully rounded, bright and done," The Sword in the Stone, and it is every bit as glorious--no, it is far more glorious than when I read it as a child. Seriously, it is a beautiful book.

But you must read it alone and apart from the compilation volume The Once and Future King. Brilliant though that volume is, comprising the two sequels, and a final book, The Candle in the Wind, that only appears in the tetralogy, the edits White made to Sword lose much of the grand daylight sense of whimsy and anachronistic comedy that make the original so special. The lost set pieces--Merlyn dueling Madam Mim (White's original cries out for Michelle Gomez to play the mad, funny, beautiful-but-deadly villainess), the rescue of Morgan le Faye's captives (Morgan as a jaded 30's sophisticate (Constance Bennett, perhaps?), whose sunglasses blot out what she doesn't want to see), and the lyrical visit to the kindly snake T. Natrix--the inserted materials from the aborted The Book of Merlyn are well worth having, but not in Sword. They are a harder, older man's writing, the writing of a man whose hope in his kind is flagging, and the sunset of that uncompleted volume is bright, but not like the dawn-filled sky of White's first Arthurian romance.

No. Read the original or go home. And do not watch the Disney movie. Wait for a proper adaptation (Michelle Gomez required!), or read the original--aloud, if you can; this marks two books I have read aloud to myself for the savor of the language. The Christmas dinner and Boxing Day boar hunt are beautiful in ways that I simply missed as a child, as a youth, as a young man. Now, ensconced in middle age, I laugh at Sir Ector--but for him, too. King Pellinore, Robin Wood, and, most surprisingly, William Twyti, King Uther's gnarled and wiry huntsman, strike different chords in me now. (I defy you to read aloud the boar hunt, and remain dry-eyed at “He [Twyti] said, 'Good dog, Beaumont the valiant, sleep now, old friend Beaumont, good old dog.' Then Robin's falchion let Beaumont out of this world, to run free with Orion and roll among the stars.” )

But White's use of language is extraordinary throughout. Here he is, setting a scene, and creating a song another man would simplify two decades later:

These marvels were great and comfortable ones, but in the old England there was a greater still. The weather behaved itself.
In the spring all the little flowers came out obediently in the meads, and the dew sparkled, and the birds sang; in the summer it was beautifully hot for no less than four months, and, if it did rain just enough for agricultural purposes, they managed to arrange it so that it rained while you were in bed; in the autumn the leaves flamed and rattled before the west winds, tempering their sad adieu with glory; and in the winter, which was confined by statute to two months, the snow lay evenly, three feet thick, but never turned into slush

Such gems are freely strewed by White throughout the novel; here's White describing the young Arthur (called the "Wart" because he's illegitimate (so everyone thinks), after falling asleep in the woods:

The boy slept well in the woodland nest where he had laid himself down, in that kind of thin but refreshing sleep which people have when they begin to lie out of doors. At first he only dipped below the surface of sleep, and skimmed along like a salmon in shallow water, so close to the surface that he fancied himself in air. He thought himself awake when he was already asleep. He saw the stars
above his face, whirling on their silent and sleepless axis, and the leaves of the trees rustling against them, and he heard small changes in the grass. These little noises of footsteps and soft-fringed wing-beats and stealthy bellies drawn over the grass blades or rattling against the bracken at first frightened or interested him, so that he moved to see what they were (but never saw), then soothed him, so that he no longer cared to see what they were but trusted them to be themselves, and finally left him altogether as he swam down deeper and deeper, nuzzling into the scented turf, into the warm ground, into the unending waters under the earth

Not a bit of showing off to be seen; the similes enrich and convey the feeling White wishes to convey, concretely.

Among all the character beats (on Sir Ector's "proper" son, Kay: “He was one of those people who would be neither a follower nor a leader, but only an aspiring heart, impatient in the failing body which imprisoned it.”), apothegms, the comedy, the call-backs (or forward; Merlyn lives backwards in time), and may have been Sherlock Holmes in the 1890s), comes the single best advice I have found in a book:

“The best thing for being sad," replied Merlin, beginning to puff and blow, "is to learn something. That's the only thing that never fails. You may grow old and trembling in your anatomies, you may lie awake at night listening to the disorder of your veins, you may miss your only love, you may see the world about you devastated by evil lunatics, or know your honour trampled in the sewers of baser minds. There is only one thing for it then — to learn. Learn why the world wags and what wags it. That is the only thing which the mind can never exhaust, never alienate, never be tortured by, never fear or distrust, and never dream of regretting. Learning is the only thing for you.”

There speaks a man who has battled his own demons with curiosity, books, keen observation.

And then read the rest, The Witch in the Wood, The Ill-Made Knight, and then return to the omnibus, and read The Candle in the Wind. And don't neglect The Book of Merlyn, because this last gasp of White's Arthurian genius, as the Second World War engulfed, and threatened, everything he believed in, White manages one last affirmation of humanity:

He [Arthur, now in old age, the night before his final battle] caught a glimpse of that extraordinary faculty in man, that strange, altruistic, rare, and obstinate decency which will make writers or scientists maintain their truths at the risk of death. Eppur si muove, Galileo was to say; it moves all the same. They were to be in a position to burn him if he would go on with it, with his preposterous nonsense about the earth moving round the sun, but he was to continue with the sublime assertion because there was something which he valued more than himself. The Truth. To recognize and to acknowledge What Is. That was the thing which man could do, which his English could do, his beloved, his sleeping, his now defenceless English. They might be stupid, ferocious, unpolitical, almost hopeless. But here and there, oh so seldome, oh so rare, oh so glorious, there were those all the same who would face the rack, the executioner, and even utter extinction, in the cause of something greater than themselves. Truth, that strange thing, the jest of Pilate's. Many stupid young men had thought they were dying for it, and many would continue to die for it, perhaps for a thousand years. They did not have to be right about their truth, as Galileo was to be. It was enough that they, the few and martyred, should establish a greatness, a thing above the sum of all they ignorantly had

The Book of Merlyn closes with a dedication to Sir Thomas Malory, and asks prayers for his soul, and that of his humble disciple (White himself), who now "lays down his books, to fight for his kind."

The books are extraordinary, unlike any others in literatureI have read.

The story begins with a boy, chasing a hawk, into the Forest Sauvage, where he meets an old man (or a young man?) who will be his tutor.

Thank you! I'd read Sword in the Stone as a child but value it far more now because I appreciate it's depths and its beauty. Is their a depbt to E Nesbit in the book, particularly in the Nurse? Thank you, lively informative essay.

What a brilliant question! I never bought of connecting E. Nesbit with White, but when you look at White’s “Mistress Masham’s Repose,” you can see her influence more obviously than in Sword.

And yes, the Nurse is very Nesbitian.

Thank you for a thought provoking notion!