End of an Era: The Gentleman Barber 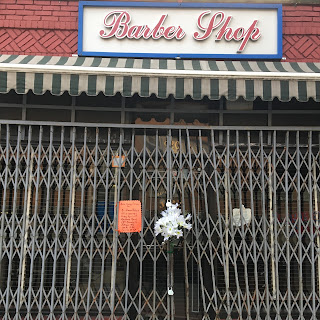 Soon after la Caterina and I moved to Bed-Stuy in 2010, I found myself walking through our new neighborhood. Quite near our house was the barber shop pictured above. Needing a haircut, and wanting to be a part of the neighborhood, I went in, and got a cut and a shave. My barber, Gene--well, here's what I wrote on Yelp:

J & P Barbershop is a rarity; an old school neighborhood shop that's a hub of the community, and a place to get a great haircut, and a close shave.

Gene is an artist with shears and straight edge, and in the 5 years at least that I've been going to him, I've never had a less than excellent cut/shave. I've watched him train barbers, too, and can tell you he takes his craft seriously.

Genes a great to talk with as well, but if you prefer silence, he gets that too.

But I didn't, in my review, mention the shop's owner, known as "John" or "JP", depending on how well you knew him. Only because Gene is my barber, and so I couldn't appraise JP's skills. But I can say that he was himself a draw, with a strong loyal following, just as Gene had his own. That's how it is with barbers. But JP welcomed us all, chatted with us, made us at home.

And all the folks who were the core of the neighborhood, who weathered the hard times in years past, would wave or shout a greeting to the man who occupied the first chair.

The real denizens of the neighborhood, not us new arrivals, knew him as "Mr Johnnie Patrick." That mix of dignity and approachable informality captures him pretty well, in my opinion.

He was an elderly gentlemen even then. Polite, unfailingly welcoming, and, as you left, handing you a "Bible Helps" tract.

The shop was mostly frequented by neighborhood guts--I think I was the only white regular, though a lot of great reviews suggest that I had company after all. On a Saturday morning, we'd hear Gospel music and sermons, and the customers would hash out politics, talk neighborhood news, and just be.

I was mostly quiet. I was glad that my neighbors accepted me as part of the scene, but this was politics and the neighborhood from the men who'd been there for many years. I was welcome, but very junior. And that was just fine by me.

The day before my ordination, I told Gene and JP why I wanted Gene's best work. From that day on, JP called me "Rev," and, at first, he stopped giving me the tracts. I asked him for one, and he smiled. Thereafter, he'd give me the tract after every cut, but I was forever "Rev."

Yesterday, la Caterina let me know that JP had died.

I left Albany early, planning to attend the service. I had miscalculated the traffic, and was stuck in the Bronx and Queens for hours. I was too late to pay my respects in person, so this little memorial must suffice.

When I got home, the little stand-alone shop was locked up today, with the notice of the funeral, and the white lilies softening the chain links and the padlock.

Somehow, I hope the little shop will survive; it was--it is--a real neighborhood hub, a place where the community throve. I was glad to be present among that community. And I will miss JP's friendliness, his strong faith, and his welcome.

And there is no barber in Brooklyn better than Gene.

Rest in Peace, Mr. Johnnie Patrick, and Rise in Glory. You were a quiet but strong pillar of the community I have come to love, and which my wife serves in her own legal practice. We will miss you, but I have faith that you are with the God you loved so well; to steal a line from Robert Bolt, "He will not refuse one who was so blithe to go to him."
Posted by Anglocat at 6:57 PM

Labels: A Fragment of Autobiography

I too am a newcomer to Bed-Stuy, have been to JP a couple of times and Gene is(was ?) my barber.

Does anyone know where Gene is working these days ?

I don’t yet—but if I find out, I’ll get his permission and post.