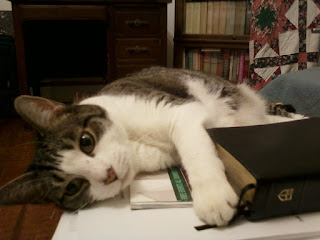 This--how you see her here--that's how I like to remember her. Betty the Prayer Kitty, whose love for the nubby-textured red version of the Book of Common Prayer warred with her love of the two volume black Daily Office Book. Betty, who shared my journey to the diaconate with me, by cuddling ferociously to the liturgical books that formed the core of my rule of life as a Christian.

Betty was, as you can see from the photo (click to embiggen, as we say on the intertubes), a subtly beautiful cat, with gold fur highlights in the seeming brown-grey patches that made continents against the ocean of white that made up most of her body. She lived a remarkable life, nearly 19 years old when she died tonight, and< was the last survivor of her litter. (We lost Elvis, the Comfort Kitty in 2014, and their brother Buster a year later (Buster was basically Steveie Smith's galloping cat come to life.

Betty kept on keeping on, a gallant High Church lady of the old school.

Except when she and my cat Elspeth went to war every now and again.

About two years year ago, she began to seem wan, a little bullied by Elspeth. We moved her up to the Northern Residence, where she rallied, and soon asserted sovereignty over the Albany home. (Poor Ninja cat!) And then Betty got sick, an instance of what the NYT called "the mystery of the waiting house cats"--hyperthyroidism. Despite the fact that she was already well over than the 12-15 years house cat life expectancy, she responded well to treatment, gained back most of the weight she had lost, and enjoyed her new digs. She was a happy, snuggly kitty, claiming the bedroom, leaving Ninja the couch. Peace reigned in the land.

Yes, I had to make sure she got subcutaneous fluids (not from me, folks, I have a very skilled cat sitter), and twice a day orally administered medicine (that I got quite handy with. I'm apparently a natural with a syringe.)

And there was much rejoicing.

Until a few weeks ago, when Betty quickly lost all the weight she'd gained, and her kidneys were malfunctioning. Suffice it to say that, once again, I had to accompany another beloved pet to the vet for one last time, one more goodbye.

I read the light tone of so much of what precedes that last sentence, and I can't help it or change it. Betty was a happy cat, a companionable animal, whose heart shaped little pink-and-brown nose, whose golden tinted fur, whose kneading my chest, always made me smile.

Even now, sad as I am, and ravaged by the ordeal of having to make the choice for her, and hold her to me until the end, a pale reflection of all the happiness we shared in the nearly 12 years we shared together comforts me little bit. Better to have been with her in that moment than not. Better to have shared all of the experience, to the end.

Better to have loved to the last moment. And beyond.

Labels: A Fragment of Autobiography, cats