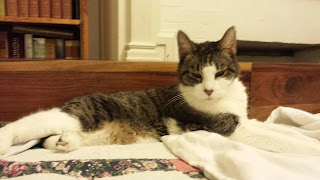 Blog mascot Betty the Anglocat has taught me many lessons. And this morning, as she lay next to her old adversary Elspeth P. Kitten, I thought how lucky I am that these disparate animals who make up our herd of cats live in (relative) peace.

Later in the day, I reflected on what a gift the people we disagree with can often be to us. Oh, I know--we can get into shouting matches, flame wars, succumb to obsessive "comment wars" because someone is wrong on the internet. La C often uses this cartoon to call me out. And she's right to. Because sometimes they teach me things I need to know and even offer me comfort when I need it. The trick, I am slowly realizing is to shut up and listen. Not just hear, listen, and try to see why we disagree, and to disagree respectfully.

It doesn't mean caving. It means respecting the person with whom I disagree enough that I make the imaginative effort to see through his or her eyes, and to grasp their perspective emotionally, not just logically. It makes disagreeing much less disagreeable when I don't leap to the conclusion that disagree with me is clearly done in bad faith or lack of thought. (I know; I'm turning 50 this year--you think I'd have learned this sooner.)

Another example: I just this past week bought a devotional book that is privately published, kept in print as a labor of love. The person who curates this work is someone with whom I am at variance on several issues significant to us both. I wrote directly for a copy, and received an email that was warm and gracious. This person has enriched my life; if we had met in a different context, we might have seen each other as caricatures not people with much more in common than might otherwise be thought.

The same thing happened with a lawyer I worked with for nearly a decade; we liked each other so much that we assumed we were in political accords. When we found we weren't, we started to argue--until we didn't. Why jeopardize a friendship that was real, over ideology? (I'm normally good about doing that, but I think we were both so stunned that the other was not aligned with our politics that we thought convincing the other would be simple.)

So a heartfelt thank you for all who have disagreed with me over matters great and small, and still cared enough to keep me in your lives. I hope to make that easier in future.
Posted by Anglocat at 5:35 PM