I never knew my paternal grandfather, but I did know, into my 20s, my maternal grandfather. A tall, spare man, with an amazing gift for anecdote, a past that had led him into many different parts of the country, through many adventures, my grandfather was a profound influence on me.

As a boy, he met Theodore Roosevelt. A bricklayer for most of his working life, he had traveled the nation, working on the U.S. Supreme Court building, where he ran across Chief Justice Hughes inspecting the works. Down south, he experienced Louisiana under the Kingfish, which he described as living on a cliff edge--"you had to watch what you said, who you said it to," I can still hear him say. Still, he would remark, it was a bit much to hear on the radio that his own doctor had killed the man.

These fragments make him sound Zelig-like, but nothing could be further from the case. It's just that he had mastered the laws of the anecdote formulated by Mark Twain and perfected by David Niven. And the first rule, I learned from listening to my grandfather's stories, was this: Never make the story about your own virtues. The best stories are those where the narrator is the observer, or, better still, the butt. Let others tell the stories that show your virtues. A bemused air, and a touch of self-deprecation, go further than a heroic saga any day. No, really, watch:

No, far from Zelig. When my father put a pool table in the basis, he offered to play a game with my grandfather, who promptly ran the table. Pool had been a way of earning spare cash in the Great Depression, you see. He taught me how to play, though I was never anything like as good as he was. Still, I learned how to "play position"--that is, to think not just of the shot you're about to make, but of the one to follow, and, if you can, the one after that. It's not unlike chess that way--which my Dad taught me.

Speaking of my own parents, I should add that he was very close not just with my mother, his daughter, but with my father. I remember him once telling me not to ever take for granted the easy, warm relationship that I had with my own Dad--his own father, he said, had been distant and austere. he wanted to be sure that I knew how lucky I was in both my parents. And he cherished my mother, whose humor he drew out better than anyone. I might have taken my parents for granted if he hadn't pointed that out.

My sister and I called him "Pop-pop" when we were children, and, when I got older and awkward (and immersed in P.G. Wodehouse, I teasingly called him "the Guv'nor." He bore it stoically, laughing with me, because he loved me and my sister with a devotion that could put up with any level of silliness we might cause. When I was in college, I grew a mustache, which my mother didn't care for, and would occasionally urge me to shave. My grandfather said nothing, but grew one himself. My mother got the joke, if a touch ruefully. (After two decades with a beard, I'm back to the mustache. Frankly, I miss the beard.)

I came upon a picture of my family today, I think around 1985, as I have my mustache (one sees Mom's point!) and my grandfather doesn't yet have his. There we are, with me looking vaguely narcoleptic: 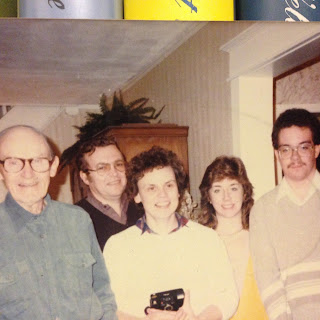 Labels: Confessions of a Continuator