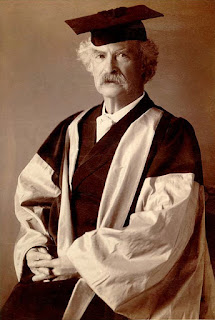 Many years ago (ok, 1987. Leave off, willya?), I wrote my senior thesis on the Autobiography of Mark Twain, which had not been, at that time, published in its entirely, but only in fragmentary editions that were either left unfinished: Albert Bigelow Paine's 2 volume Mark Twain's Autobiography (1924)--which at least tried to keep faith with the author; Bernard DeVoto's 1940 culling of excerpts Mark Twain in Eruption; Charles Neider's fundamentally fraudulent, and appallingly mislabeled The Autobiography of Mark Twain (1960),which betrayed the author by scrapping his stream of consciousness structure, political musings, and other controversial content, in favor of a warm, Reader's Digest youth-to-old-age series of anecdotes. (Since then, the late Michael J. Kiskis released an admittedly incomplete version, the sections Twain published in his own lifetime in the pass of the North American Review, called Mark Twain's Autobiography. Unlike Neider, who boasted that he had improved Twain's writing (!), Kiskis Professor referred to his own book, in a letter he kindly sent me, as a useful introduction until the definitive University of California edition was out. He also quite reasonably defended its value in its own right as the last extended piece Twain presented the public, and the most poliched version he reached of the admittedly much longer Autobiographical Dictations.)

One of the few touches I admired in Neider's volume was his addition, in its proper place, of Twain's touching--one might say heart-breaking--tribute to his daughter Jean, the essay The Death of Jean, originally published by Paine in his collection What is Man? Neider's restoration of the piece was right. In his edition--like Paine's publication of the piece--is edited. It's powerful and moving, and more full than Paine's--bit still cut, in two significant aspects.

We know that, now that The Autobiography of Mark Twain volume 3 is, at long last, out. I just received it, and flipping through, noticed that in the new edition, "The Death of Jean" begins with the author--writing on Christmas Eve, shortly after Jean's death in her bath after an epileptic seizure--writing that with her data, the Autobiography is closed, its purpose in leaving his children a source of income after his death moot, as Clara was now well off, and Jean beyond his help. (Pp. 310-311) (Clemens vacillated on the purpose of the Autobiography--at times he loved it for itself, attires he saw it as a self-help copyright extension, at times he saw it as a literary stroke of genius. He contained multitudes, what can I say?)

There are other passages that were new to me, too, including the suggestion that Jean's "disease, and its awful convulsions, wore out her gentle mother's strength with grief and watching and anxiety, and caused her death, poor Livy!" (P. 316). As Resa Willis notes, earlier he blamed himself for her death--the strain of the round-the-world tour, the loss of their Hartford home, his visiting her too often in her sickroom. Willis also notes that Jean had not had a seizure for 13 months before her mother's death.

Here, in his renewed grief, he offloads some of his guilt onto Jean, simultaneously absolving her; mourning her sincerely, but trying to shed a burden too long carried. (Again, Willis notes that Olivia Langdon Clemens had suffered from heart trouble and hyperthyroidism, among other medical problems, for years.)

All of which is to say that Clemens was a complicated man, and that his editors tried to smooth out his jagged edges. A mistake, I think; we need Mark Twain, but we need him in all his complexity and human frailty. And that's what he tried to give us, and why he was "speaking from the grave."
Posted by Anglocat at 9:09 PM