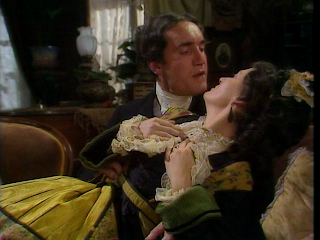 In writing Phineas at Bay, one of the key issues was how to deal with romance and sexuality in a modern way and still be true to the Trollopean ethos. It's not that Trollope is sex-averse. Far from it; by the standards of his day, he pushes the boundaries, what with La Signora Madeline Vesey NeroniCarry Brattle in The Vicar of Bullhampton to that unreformed old roué, the old Duke of Omnium, to Lady Glencora's frankly sexual yearning for Burgo Fitzgerald, to name but a few instance. Trollope held his own day's standards on an intellectual level, but he did not blink from the fact that they were often flouted, and that the cost of the flouting often was left to the more vulnerable party to pay. (One more instance--that rat George Vavsor's discarded mistress.)

Now, I could have hewed to the safe pattern --an ingenue or two, chaste young love,that sort of thing. But, although Trollope often included that classic Victorian safe plot-line, he dared to go beyond it, and so, it seemed, must I.

I didn't want to lose the feeling of authenticity and unbalance the novel by including matter that was clearly outside of what Trollope could have published, nor did I want to uncritically embrace the social and sexual mores of Victorian England, with their concomitant repression and hypocrisy. In other words, I wanted to have, in addition to my story of young love, have two parallels. One (which I do not wish to spoil for the casual reader who has not yet, but might wish to, read the novel), involves a troubled young man who finds love with a woman of a different social class, but one whose life experiences allow her to understand him. Their coming together is facilitated by his parents' own troubled courtship in one of Trollope's novels, and the fact that their own marriage had become highly undesirable socially for very different reasons.

The third relationship--ah, here is where I tried to evoke both Trollope's own characters' development over time and the fin de siècle setting. As portrayed by Trollope, Lizzie Eustace, raised to be a demimondaine, who "liked admiration [and] liked the power of being arrogant to those around her" (and indeed to domineer over her unfortunate companion, Miss McNulty), was tailor-made for the era. So too her now-divorced (or annulled, more properly speaking), husband, the Rev. Jospeh Emilius--a shady clergyman who uses his talents to gain profit and power. In exploring his psyche and hers together, a common interest in power, and an inability to let go, seemed to bind them. In Phineas at Bay, their relationship is reignited--and the question is can two power-driven, sexually unconventional monsters find in themselves something beyond mutual exploitation, or an unending battle for dominance?

The question is by no means intended to be easy for them. It is very current in the world in which Lizzie and Emilius live. Indeed, it's one that (as I discovered after publication) at least one Trollope scholar found already present in his works, as well as in other Victorian works. Certainly the fin de siècle loosening of moral restrictions saw an upswing of such themes in literature in England and on the Continent. So Lizzie and Emilius are very much of their time (as demonstrated by the allusions in the description of her home, to give but one example). But I did not want to just leave it as simple as a pair of debauchees exploiting or even just enjoying each other.

And so I allowed myself one small deviation from the self-imposed rule of no scene that Trollope could have been published. Emilius reflects on having seen a scar on Lizzie's abdomen in (obviously, but inferentially) sexual circumstances. A scar that she did not bear during their (erased) marriage. In seeing time at work on her flesh, Emilius feels something beyond lust, or even obsession.

The two of them are moral monsters in many ways. He is a murderer, she is a thief and a rarefied blackmailer. But each has a glimmer of something better, whether or not they can find their way to it.

The strength of the reaction this plot thread has drawn is surprising to me--some love it, some hate it. But that readers are passionate about these two profoundly compromised and even tainted figures nonetheless trying to cope with the risks and fears of becoming more than monsters seems to suggest that, like Frankenstein's monster, it's alive.
Posted by Anglocat at 3:36 PM