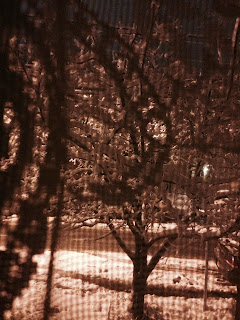 I admit it, I've always loved snow, and winter. It's the reason I'll never move to Florida of my own free will, or any such place. There's something in my soul that responds to the innocence and the darkness both of winter.

The innocence: playing in the snow, my father building a snow dinosaur one year (a proper Tyrannosaurus Rex, thankee, and not a Spielbergian T-Rex) or a bear, based which direction his imagination took that year. Hot cocoa after shoveling, snow forts. The simple, stately beauty of a quotidian world transfigured into something quite--other. And the quiet! The silence as untrodden, fresh snow laps the pathways that once were clear.

And the experience: cold, dark falling early, the frisson of the world transformed into a place where the Norse sagas could take place, where magic seemed real and not always benign. The world evoked by Ghost Story or Poe's Narrative of Arthur Gordon Pym, of Nantucket. Of Lewis's White Witch, come to that.

Winter is come again, and as I walked through snow today, I felt all the child's enthusiasm for it again. I hope I never lose that.
Posted by Anglocat at 6:38 PM