"The Mariner hath his will…" 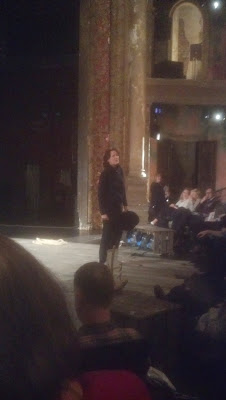 Tonight at BAM I saw Fiona Shaw perform The Rime of the Ancient Mariner, with dancer Daniel Hay Gordon supporting her.

It's an extraordinary interpretation of an extraordinary poem, from the first moments, with Shaw roaming around the audience, to the last, which fully conveys the phantasmagorical nature of Coleridge's poem. Shaw's own performance is kinetic, lively, stark and dramatic at moments, and with little grace notes of comic relief where they would not do violence to the text.

Here's a taste of Ms. Shaw's interpretation, after the shooting of the albatross:

The lost ship, crew baking in the heat briefly thinking rescue has come in the form of another ship, only to find:

Alas! (thought I, and my heart beat loud)
How fast she nears and nears!
Are those her sails that glance in the sun,
Like restless gossameres?

Are those her ribs through which the sun
Did peer, as through a grate?
And is that Woman all her crew?
Is that a Death? and are there two?
Is Death that Woman's mate?

Her lips were red, her looks were free,
Her locks were yellow as gold:
Her skin was as white as leprosy,
The Nightmare Life-in-Death was she,
Who thicks man's blood with cold.

The naked hulk alongside came,
And the twain were casting dice;
`The game is done! I've won! I've won!'
Quoth she, and whistles thrice.


To be diced for between the Nightmare Life-in-Death and Death himself?

And the Mariner alone survives, his ship piloted by the dead, "a ghastly crew" at times, but the Mariner saved by the beauty of living creatures which frees him to pray, leading him to sleep, and then to wake up to life-saving rain. Only for the ship to be stopped, and jerked back and forth while two voices debate:

How long in that same fit I lay,
I have not to declare;
But ere my living life returned,
I heard and in my soul discerned
Two voices in the air.

`Is it he?' quoth one, `Is this the man?
By him who died on cross,
With his cruel bow he laid full low
The harmless Albatross.

The spirit who bideth by himself
In the land of mist and snow,
He loved the bird that loved the man
Who shot him with his bow.'

The other was a softer voice,
As soft as honey-dew:
Quoth he, `The man hath penance done,
And penance more will do.'

As indeed he does, before the tale is complete. So strange a poem ends with a moral lesson, interestingly enough:

He prayeth well, who loveth well
Both man and bird and beast.

He prayeth best, who loveth best
All things both great and small;
For the dear God who loveth us,
He made and loveth all."


Really, just go see it. It's that simple.

(Photo by Karen Clark)
Posted by Anglocat at 8:02 PM