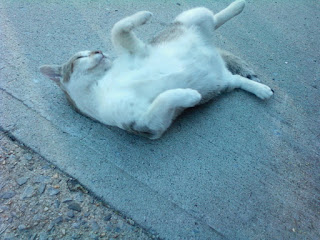 The above-pictured cat, who I named Greymalkin about 4 or 5 years ago, was a feral cat in our neighborhood who found us when La Caterina and I moved into an apartment together in Long Island City.

Except he had no interest in being a feral cat. He was quite sure that he belonged inside, and complained quite persistently at our failure to perceive this. If I opened the door on a weekend morning to get the paper, odds were that Greymalkin would shoot into the shared vestibule, and demand food and attention, and, ultimately, entry into our home. We never let him in, but we got him fixed, fed him, and, over time, learned to pet and snuggle him. Like some feral cats, Greymalkin never really was truly feral; he was a housecat at heart.

He became a housecat when we took him with us to our current home, and he thrived. But he had FIV, and the other cats had to be kep away from him, and, most reluctantly, we found him a new home with a good friend of mine. That was three years ago.

Greymalkin had to be put to sleep today. I got the call this afternoon from my friend, who has been great to him over the past three years. When we visited, we saw how bonded they were, and how affectionate he was with her. He recognized us, though, and let pet him and me croon into his ear, like I did when he lived with us. When my friend called from the ASPCA, the vet hd left her alone with him for a few minutes. AFter updating me, she put the phone near him, and let me say goodbye to my friend.

I'm glad he was in my life, and glad that he found a loving home. I'm glad that he died loved and with his person. And that I got to say goodbye.
Posted by Anglocat at 6:41 PM

Greymalkin had two Moms and a Dad. He was so lucky.

Greymalkin had two Moms and a Dad. He was so lucky.

Thank you for all the love you showed him, and for being a great kitten mama.