The Winter of Our Discontents 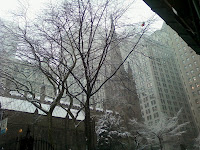 So where are we in the Anglican Wars?

Well,
Dr. Mouneer Anis, President Bishop of the Anglican Province of Jerusalem and the Middle East, has resigned from the Standing Committee of the Anglican Communion, giving rise to a discussion at Covenant that demonstrates, once again, why I have finally come to think separaration is inevitable. Comments such as this make my point for me:

IMHO this is hugely damaging to +++Williams who has effectually wrested control away from the Primates. They are not due to meet until 2011. He recast Lambeth (with its limited attendees) by faux indaba while issuing his own pronouncements. +++Williams made a mockery of all due process at the Jamaica ACC. Before that his behavior in New Orleans was that of a toady to the paymasters of TEC. He unilaterally voided the Dar es Salaam resolutions of the Primates. Now he has been called by this resignation.

ACI offer one possible way forward. What will the CP group have to say on this? Both these groups are struggling - honorably, in my opinion - to find a solution where the Communion stays united but in which provinces such as TEC and ACoC will inevitably be marginalized. Will this be possible? IMHO no. Into this situation we await the effects of the consents to Ms. Glasspool’s election in LA. I have no doubt that these will be given. Also we await the response of the Global South gathering in April, where they are due to respond to the Covenant as presented in December. I believe that they will gain further strength and develop upon ++Anis’ themes. It is my guess that ++Anis will be a significant participant in this gathering. I do foresee a non Canterbury centered Anglican Communion, but wonder who among the Western Churches might be part of the same. This might well be a working out of the two tier membership described by Canterbury. After WWII England was shorn of its empire. Will this now happen to the AC and Canterbury? Certainly the growth and spiritual life, vigor and energy are in the Global South.

Oh, yes, the "spiritual life and vigor" of calling for secular persecution of gays and lesbains, of raiding other Provinces and claiming their assets, and of justifying violence against other faiths. And that's just Nigeria. No, seriously. And, again, I'm not kidding.

Then, of course, the repeated refernces to TEC as preaching a "faux gospel", of Abp. Williams as being "in the pay of TEC." (If he is, we're getting ripped off, in my opinion). What I fond truly interesting is this: nobody on the site, not even the most reasonable voices (except for the last progressive standing there, "Iron Man" Michael Russell, who manages to stay engaged despite the bile), even contemplates the prospect that TEC is filled with Christians who believe that they are serving the Gospel of Jesus Christ. There's no belief that we can be wrong, but well intentioned. We're heretics, and must be crushed.

And herein lies the rub. We can't be in communion with these folks, because they hate us. If we sign the Covenant, they will try to use it against us, because that is its only reason for existing. If we don't, they will say we no longer "exist" as an Anglican body, even though it is the Covenant which is new, transforming the Communion into a trans-national church that never existed before.

Ironically, the saner voices on this thread express only concern that the self-anointed Orthodox have "lost trust" in the Covenant process. Nobody there seems interested in asking why we progressives should have any trust in them and their intentions let alone the process they desire.

I have at long last been shifted from an advocate of endeavoring to reconcile and stay in Communion to believing that we indeed do not belong together. We are learning to hate one another now, and and rather than that, I reluctantly welcome the untempered schism.

Photo By: Anglocat, January 2010, Trinity Church On a Snowy Morning
Posted by Anglocat at 4:47 PM