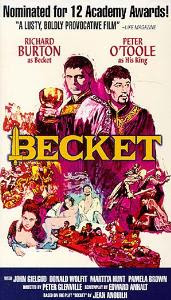 When I was a teenager, I first saw the film Becket (on cable, I hasten to add) and was bowled over by the conflict between two friends divided by their best selves--Becket's duty to his Church, Henry's to the political role of King. In the film, their flaws unite them--Henry's wenching and drinking, Becket's collaboration with the Normans in their oppression of his Saxon people.

Of course, Jean Anouilh didn't get his facts at all right--Becket was not a Saxon as depicted, but a Norman, and a member of the prosperous middle class. But the archetypical conflict drew me to the story, and while I was impressed by both characters, I found myself sympathising more with Henry, whose pain at the dissolution of his closest friendship was so well played by O'Toole.

Imagine my surprise when, years later, I found out that one of the most pressing grounds for the conflict between Becket and Henrywas the treatment of "criminous clergy" who committed offenses against the laity; in the face of years of inaction by the ecclesiastical authorities, Henry wanted the right to try such clerics in the secular courts.

There was much more to it than that, of course. The real Thomas Becket may have been headstrong and arrogant, but he was also seeking to preserve the institution of the Church as it was entrusted to him, and to resist a King who was re-making the political institutions of his day and centralizing power in the King's person.

As to Becket's murder, the King's role in it has always been sharply disputed--the authenticity and meaning of the infamous quotation, "will no one rid me of this turbulent priest?" have been debated for centuries. (An excellent account is contained in W.L. Warren's biography, Henry II).

What cannot be doubted is Becket's courage, and his fidelity to his vision of the Church. That it is a vision that is now very alien to us should not lead us to lose sight of those values. The reality may be less romantic than the movie; it's not less moving.
Posted by Anglocat at 5:34 PM