Kittens in the Mist

My wife, known popularly as la Caterina, is a particpant in the New York City Feral Cat Initiative, a program which " is committed to solving NYC's feral cat overpopulation crisis through the humane, non-lethal method of Trap-Neuter-Return, or TNR for short." TNR is just what it says--you trap the feral cats, get them neutered, vaccinated, and checked out, return them to a sustainable habitat. You slow the breeding, stabilize the local population, and the cats take care of most rodent problems. The program provides low-cost veterinary services, as well as straw (for shelters), sometimes food, and advice. Sometimes cats prove to be friendly enough to place in homes (we have found several homes that way, including our long-term boarder, now resident, Ninja Kitteh, pictured below). 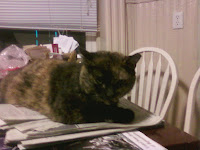 We also helped find a home for one particularly sweet cat, Sanders, who had lost an eye, but not his sunny disposition. The blog Balloon Juice featured Sanders, and we placed him thanks to them.

Not to mention this little chap, who la C found in our backyard: 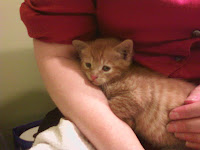 Now, La Caterina's colony started as a small one in our LIC backyard (we called it the "Dutch Kills Orchard and Cattery", since we had fruit bearing trees as well). Now, though, she is co-proprietor and Chief Cat Wrangler of a colony that takes up the undeveloped portions of the Brooklyn Navy Yard and is also welcomed by some of the businesses situated there. So, she and her fellow cat-wranglers share the duty with the occasional drafted husband/significant other.

Where is, of course, where I come in.

I'm a sucker for animals. Always have been. I wouldn't have chosen this as a long term project, but I'm found of the little devils now, and go more often than not with her on the weekends. They greet us and the friendliest let us pet them, we dish out food, check their water, clean their water, etc.

Winter's the hardest, and we're gearing up for what looks like a cold one. In the wake of Sandy, though, the Ballon Juice folks raised money for la Caterina and her colleagues (I'm just the help) to restock supplies and do clean up. We did, and are now in pretty good shape for the winter.

Anyway, here are a few shots of our Navy Yard friends (click too embiggen, as they say):

Here's JJ, who's very affectionate. (His eyes water, and you can see that if you look closely, but not to worry, he's being treated.) 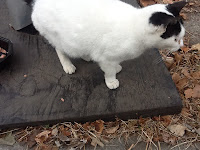 Here are several of the gang--the gentle-faced, slightly cross-eyed tuxedo cat on the right is Chauncey Gardiner, who is especially good natured--after feeding time today he came over to me just for affection: 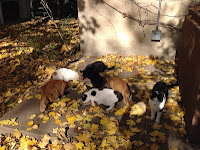 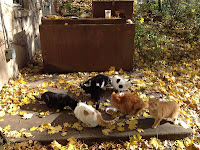 Finally, here's Buddy, eating where he can keep an eye on us: 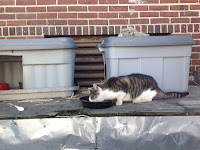 Sometimes the work gets a bit dirty, but it's hard not to enjoy the company of these little guys.
Posted by Anglocat at 7:05 PM

This is a somewhat alarming choice of title, considering how that book about the gorilla lady ends.

Ha! Well, fair enough. I tried to work out a "Dingo et me baby" pun, but failed miserably...