Now, when La Caterina and I were invited to an inauguration party on January 20, 2009, she decided preparations had to be made. She decided to create a special Inaugural Tiara to wear to the party. Being a Southerner, she did not do it by halves: 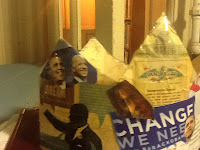 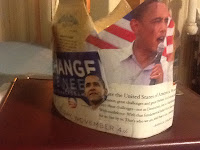 And another view of it: 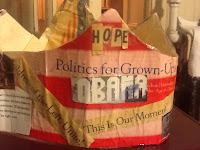 The Inaugural Tiara was La Caterina's version of the triumphal blog post I put up the night before, so when she announced today that the time had come to retire the (admittedly well worn and used) Inaugural Tiara, last donned on Election Day 2012, I wondered what that betided. She answered, "a NEW Inaugural Tiara!"

(Point of personal privilege: Although I didn't take this video, I was there for this very concert. Sound quality's less than ideal, but the band killed, as the video shows...)
Posted by Anglocat at 4:59 PM