I live in a beautiful brownstone section of Bed-Stuy, in which a core, predominantly African-American community held out despite the ravages of crack, the Drug War, and the travails of "Do or Die Bed-Stuy". Well, all that was long before I moved in.

It's not (yet) a wealthy area, although it may become so one day. I hope not; I hope that the good neighbors I have who faced down gangs, held onto homes in dark times, continue to enjoy them for years to come. For now, it's a community. At Ms. Dahlia's Cafe, they know me and La Caterina, and they know better than I do how she likes her lattes. At Peaches Hothouse, they know what I like to drink, and chat about literature or theology with me.

One neighbor--second generation in the area, a veteran of Viet Nam--explained to me his art exhibit, which dates back to the bad old days, and pressed me to read Robert Caro's The Power Broker, to understand the City in which I have lived since I was 18.

We were married, of course, across the street from our home, in a beautiful Victorian mansion, run by a lady who bought the place when it was being misused as an SRO. She brought it back to its former splendor, when the area was still thought of as radically unstable. Now, it serves as a wonderful event space, a bed and breakfast, and a gathering place for our active Block Association. With typical generosity, Ms. Claudia, as the owner is known in the neighborhood, donated the space to the EFM group I lead for our fall retreat. The music was provided by our next door neighbor and his friend since childhood, a native of our block. 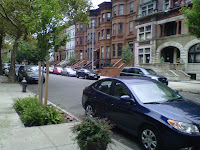 I mention all this today because at the polling place this morning--a public school, where the principal stands at the front door when school opens, to shake the hand of every pupil at the start of the day--the community was out in full force. Old, middle aged, and young. White, Black, Asian, Hispanic--all there, voting together. The lines were long, though not unbearably so. The poll workers were mostly (not entirely) the elderly women who held this community together decades ago. Though they had a rooting interest, if you knew them outside of the room, they were studiously, scrupulously neutral. A gentleman walked around helping voters with difficulties. Chairs were found for the disabled, and a spirit of bonhomie prevailed. These folks were here to exercise the franchise, and they felt fine.

La Caterina (who understandably, did not take my rumbled-dumbledy name, but kept hers, in which her degrees and law license were issued) was sent to a different, slower moving line than I was. As my line snaked around the back of the room, I passed several women, including one near neighbor, who smiled at me and wished me a good morning. Near her was a striking looking woman in a purple dress, with a matching round hat. As I passed her by, she smiled too.

"Grace and peace to you," she said.

"And to you," I replied, not sure of how to respond.

"God bless you." she said. Apparently, my reply was acceptable.

Grace and peace. I have found that, in this neighborhood so often thought of as singularly lacking in those attributes. Sure, there's the occasional player-of-loud-music, or noisy party. But every morning, I walk to the subway past beautiful brownstones down leafy streets. I chat with friendly familiar faces, and I see the grace and peace of my community.

May you find both in yours.