A Tiny Story, In Memory of a Tiny Cat 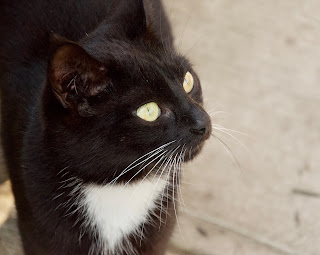 La Caterina and I have been feeding the feral cats in the Brooklyn Navy Yard for--my, it must be getting on for ten years now. At least 9, I'm sure of that. We first joined a long-standing friend of both hers and mine when she generously placed three cats we had located in the back yard of our Queens digs which la C called the Dutch Kills Orchard and Cattery (we had two fruit trees in the back yards). When, perforce, we moved to Brooklyn, la C (and thus me, in a non-executive, "Thog lift!" capacity) became volunteers at our friend's large feral cat colony spanning both Steiner Studios and the Annex of the Brooklyn Navy Yard.

We made friends with the other cat ladies and the cats. The Steiner cats flourished in the studio's parking lots, while the Annex cats had the run of the sprawling, overgrown Victorian buildings and the grass sward between them. In those halcyon days, the ruined buildings were a feline domain, and the cats themselves an attraction on the public tours that ran through the annex on buses.

Alas, now the Annex is closed and we feed the cats at certain designated points. Still, they let us do it, and even allow us to use the studio water supply to refill the water jugs we use to provision our furry charges. Over the years, we have lost a fair amount of the original cats, but a core cast has delighted us over the years.

We lost one last week. Tiny Cat, pictured above, was one of the original Steiner cats (at least, she has been there as long as la C and I were serving the kitties food and beverages). Years before Hurricane Sandy, this small, petite black cat would demand a separate bowl of food, or jump in the hatchback opening of our Saturn Vue and help herself to some of the large wet cat food stock filling la C's Tupperware boxes. Tiny was, well, tiny, but she was funny in her aggressiveness, and a beautiful, trim cat with luminous eyes.

I remember on my first visit, la C warned me, "Don't pet Tiny. She scratches. For real."

Now, la C is the Cat Whisperer, but I too have had cats for many years--getting on for 20, now. So, recklessly, I dared to approach Tiny, and to tentatively pet her. Remarkably, she took to me, and the cat that you could not approach allowed me to pet her for what has been a long service in the Navy Yard/Steiner Studios. I loved the little beast from the moment she accepted me, and petting Tiny was one of the highlights of a Navy Yard visit for me. She was as silky as a pampered house cat could be, and as sleek as anyone could hope for their pet to be. She was feral but friendly, made her own rules, but had favorites.

More so than I, la C's colleague at the Yard Kerin was a Tiny Cat adoptee as well. The little thing was ok with la C, loved Kerin and was unaccountably fond of me. In all our years there, Tiny thought about scratching me once, and then changing her mind, head-butted the hand she had moved to attack. She was always painstakingly gentle with me.

According to the ASPCA "community cats", that is, "outdoor, unowned, free-roaming cats," have short lives: "If a community cat survives kittenhood, his average lifespan is less than two years if living on his own. If a cat is lucky enough to be in a colony that has a caretaker, he may reach 10 years." So if you wonder why busy professionals like Kerin, la C and their friends and colleagues burn a helluva lot of their scant spare time nursemaiding these cats it's that 8 year difference. They give these cats a good life, love, and stability. Which is why so many of them have lasted a decade or longer.

Tiny Cat made her decade (and in fact Tiny was probably a bit older) but we lost her tragically. She died, as I said, but not of sickness or old age, but of--misadventure. I'm not sure just what happened, because her body was found post-mortem. Not a natural death, as she deserved.

CORRECTION: Kerin writes to inform me that Tiny was found injured but alive, and that she was mercifully st free from pain with Kerin comforting her. She didn’t die alone, and that is a comfort.

I miss her. In her memory, John Keats's "To Mrs. Reynolds' Cat":

Cat! who hast past thy grand climacteric,
How many mice and rats hast in thy days
Destroy’d?—how many tit bits stolen? Gaze
With those bright languid segments green and prick
Those velvet ears—but pr’ythee do not stick
Thy latent talons in me—and upraise
Thy gentle mew—and tell me all thy frays
Of fish and mice, and rats and tender chick.
Nay, look not down, nor lick thy dainty wrists—
For all the wheezy asthma,—and for all
Thy tail’s tip is nicked off—and though the fists
Of many a maid have given thee many a maul,
Still is that fur as soft as when the lists
In youth thou enter’dst on glass-bottled wall

Tiny Cat's fur was ever soft, her velvet ears had only the nick that warns Animal Control that this cat has a place, and is cared for, her tail may have had a nick or two, but her affectionate, slightly sardonic spirit aways delighted me--that I was accepted, for no real reason, by the sharpest cat of the lot.

May she rest in peace.

As mentioned a fair piece of Work Mr. W. And a fairly happy yet sad story, all the same. I miss your blog, You should resurrect it. You'll have more than one faithful reader of that I am sure.

Peace and May Tiny rest,

Thanks, Jim. As you see, it’s making a small comeback. Next MASH entry this weekend.