Did you see it?

Did you see the videos that have gone viral on the news, or are proliferating around Twitter, or did you watch in real time, as flames shot up the length of the towering spire of Notre Dame Cathedral?

Did you see—see for yourself—that elegant, finger pointing at the heavens crack, at about the halfway point, and slowly, inexorably topple, only to fall onto the already burning roof?

Did you see the blazing roof of the Cathedral?

And have you seen the pictures of the damage? The soot and charcoal everywhere, the near-total destruction of one of the great hallowed places of the world?

I say near total—two thirds of the roof is gone, leaving the cathedral open to the sky, the interior damage is still being assessed. The bell towers so beloved of Victor Hugo’s fictional Quasimodo, were spared.

As of today, nobody is quite sure what caused the fire—electrical problems, an accident on the part of the reconstruction team working to preserve and shore up the nearly 800 year old treasure.

So far as we know, there is no reason to believe that the Cathedral suffered anything but an accident.

As I watched it, though, I flashed back on another Cathedral destroyed by fire—and very much not by accident.

During the Second World War, the Nazi regime tried to cow the British into submission by what the British called Baedeker raids—bombing runs to destroy historic sites that had been chosen by the famous Baedeker Guide books.

In November 1940, one of those bombing raids opened up Coventry Cathedral to the sky.

The roof, the windows, the beautiful interior were reduced to smouldering, blackened rubble. Only the outer shell of the building survived.

Seeing Notre Dame burn makes me realize the shock and loss the people of Coventry endured, knowing that the treasure of their community was reduced to a shell because it had been awarded stars in a guide book. And at least at Notre Dame, nobody was, as far as the reports tell us, killed—one firefighter and two police officer injured, the firefighter seriously—but no deaths, as far as we know, and God grant that it remain so.

Coventry was not so fortunate.

568 people were killed, roughly 1200 injured, nearly 900 of them seriously. Almost 8,000 houses were destroyed outright, or so damaged that the occupants had to be evacuated

The next day, the very next day after the bombing raid, the Cathedral provost, Richard Howard, chalked on the wall of the ruined sanctuary the words, “Father, Forgive.”

Before the fires had died down, before it was safe to inspect the damage inside, Coventry Cathedral began its ministry of reconciliation.

While the losses were fresh.

While the outcome of the battle was far from clear.

While the war looked like it would end with Fascism triumphant, decency buried in rubble and scorched wood.

When it was safe to enter the ruined, shattered Cathedral, the people of Coventry doubled down on Howard’s bold move. A stonemason named Jock Forbes built an altar from the rubble. Behind it, two charred, twisted roof beams, still attached to each other, stood as the Cross behind the altar. Forbes had carved the words “Father, Forgive,” into the altar. I have been told that at the first service in the shell of the cathedral, under the twisted, blackened cross, and the open sky—the unjust skies that had rained down devastation and death so recently—that the people of Coventry prayed for their losses, but also for the souls of the German pilots who had inflicted those losses.

A few weeks later, on Christmas Day, Provost Howard spoke over the radio from the ruins. He asked those who were listening “to banish all thoughts of revenge” and called on them to “make a kinder, simpler world—a more Christ-Child like world.”

Coventry had taken its stand.

It has devoted itself to a mission of forgiveness and reconciliation ever since.

Half a century later, on my first trip to England, we stopped at the new Cathedral next to the ancient ruin. I was drawn into the ruins, and pulled by the inscription on the altar, to the twisted, blackened Cross,

And at once I was confronted with the best and worst of humanity.

I don’t need to specify the worst—the ruins had been tidied up, shored up, cleaned up. But the house of worship was a vestige, literally a shell.

But inside the shell was a pearl.

A pearl beyond all price, like the one in the Gospel.

That pearl was the echo, resounding from that day to the present, of people at their very best—following the example of Jesus Christ on the Cross, praying for his persecutors with his rasping, dying breath.

In that moment, standing there, I wasn’t thinking; I was in awe. And then it clicked in my mind—THIS. This is what we are meant to be. It’s all real, every bit of it, if we choose it, grasp it, and try to live it.

I say “try” advisedly, because we fail. All of us. Anyone whos’s driven in a traffic jam with me has living proof of that fact.

But at our best, we can follow the example of Jesus on the Cross, and forgive those who have hurt us. And we’d better get on it.

Because we are a long way off from the “kinder, simpler, more Christ Child-like world” that Richard Howard called out for in Christmas, 1940. We seem further from it than ever in my lifetime. Our British friends riven by conflict over Brexit, our own politics defaced with division and distrust curdling into contempt. We need the Cross today more than ever, and these words of Jesus call us to do better.

Because Jesus did. And Jesus does.

Maybe it’s because He knows us better than we know ourselves, and is able to understand how easy it is to fool ourselves into the worst betrayals, the worst crimes. After all, Peter has denied him out of fear, Judas has sold him for profit, the Temple authorities have betrayed him to the Romans, and the Romans—well, imagine the betrayal of finding in the occupier of your nation someone who understands exactly what is going on, knows that you’re not guilty, and then, as a matter of political expediency, sends you to an agonizing death anyway.

And yet he gasps, “Father, forgive them, for they know not what they do.”

It’s all too common and all too tempting to read these words to mean that the whole cast of characters who betrayed Jesus that night and that day would have acted better if they knew he was the Messiah.

But that glib, easy reason lets us off the hook. It protects us from the duty to forgive. And allows us to hold on to our self-righteousness, out appalling certainty that we are right, and they—define the term yourself—are wrong. And only afterward do we realize that certainty is a betrayal of all Jesus taught us.

And not just because Jesus was the Messiah. Because they have, in betraying Jesus, betrayed what was best in them.

Father, forgive us, for we know not what we do. 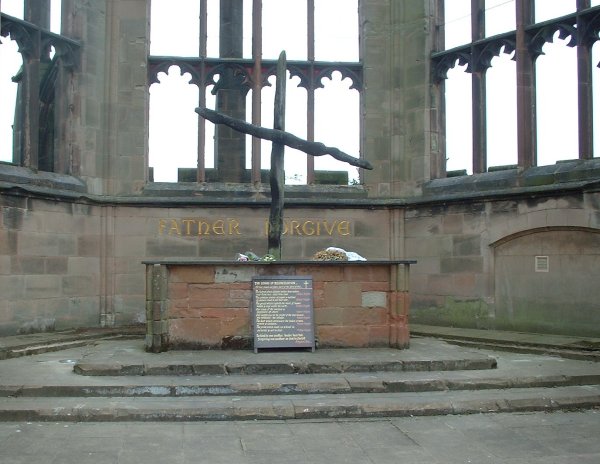