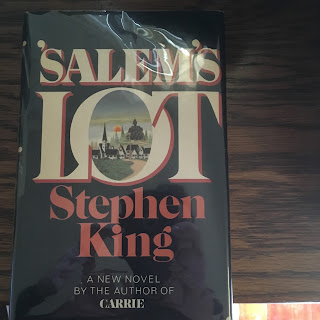 It's a long time since I read 'Salem's Lot, Stephen King's 1975 second novel. When I read it in my early teens, I loved it--the way the town itself was a key character, the slow, drawn out evocation of the time and place, and the investment in character drawing to get me, the reader, invested in the various characters' fates. I liked the book so much that, when I first moved upstate over a decade ago, I used to refer to the beautiful gabled house that commanded a hill not far from my own victorian house as "the Marsten House," and yes, I would have bought it in a heartbeat.

I have always had an affinity for a really well told vampire story, and after trying, on a recommendation by a writer I respect, Charles L. Grant's vampire novel, The Soft Whisper of the Dead, I was disappointed. But it did make me think of the earlier 'Salem's Lot, and of my youthful enjoyment of that book.

So, when I found an early copy in fine shape (alas, it's the Book Club Edition), for a very reasonable price online, I bought it. I always like to read a book in a state that is as close to how it first appeared as I can, and this copy does achieve that--apparently King's first few books were printed at the same size as the book club editions, so the resemblance is complete barring the error on the dust jacket, present in the first edition, but not on my copy--referring to "Father Cody, the bad priest," not "Father Callahan, the bad priest." (By the way, that's a pretty gross oversimplification of the single most complex character in the book, in my opinion.)

So, you may ask, how does it hold up?

Pretty damn well, to tell you the truth.

Do I have to give a spoiler alert for a 42 year old novel that has been adapted twice for television?

Consider yourself warned by the Queen of Spoilers:

When I first read the novel, my heart broke for Father Callahan, the priest whose despair at the banality of the modern world, and the collective rejection of the spiritual life except as a prop to absolve guilt, when he is finally confronted with evil on the grand scale. Now, reading the book as a member of the clergy, the whiskey-priest (echo of Graham Greene very much intended) touches me even more. Father Callahan is at first energized by the conflict, providing strong support to the little group that opposes the invasion of their town, and acquits himself pretty well against Barlow--he does save Mark after all, and it's only his momentary hesitation, and then his lack of faith, despite his initial success, that causes his downfall. His shame and guilt at his failure are genuinely tragic--the years of booze and doubt have eroded his faith to the point that when the test he's always dreamed of arrives, he just isn't up to it.

Callahan is just one thread in a complex skein, but his story was the one that resonated most with me. He is a good man, whose failure is understandable, but condemns him in his own mind utterly. (King's later revival of the character in the interesting but problematic Dark Tower series depicts a harrowing road toward redemption.) But the other main characters, Ben, Matt, Susan, and Mark, are each interestingly drawn, as are the less significant players. Ben in particular interested me far more in this re-read than in my earlier encounters with the novel. Susan's struggles with her mother (shades of Carrie?) are more significant and deeper than I had remembered.

Barlow--not, as in the 1979 Tobe Hooper-helmed mini-series, a silent Nosferatu knock-off, but avoids the other trap of being a Dracula clone. Instead, Barlow dates back to pre-Christian times, or so he says, and he really doesn't appear to be lying. His viewpoint is profoundly alien, and contemptuous, but he is not a cipher. His familiar Straker loses something by not being James Mason, but he is a far cry from a pathetic Renfield. His clipped tones, occasional cold laughs, and cool efficiency make him a threat in his own right.

It's a classic variation on the vampire story, with a town that starts off as charming, if rough among the edges, and becomes by degrees spooky and then chilling.

The frame story and basic conceit (the haunted town as a character) were successful to the point that Peter Straub's superb Ghost Story echo it--the highly dubious spectacle of a man on the run with a child not his own in the beginning, resolved in the last act, long after the main story has ended. (I'm not accusing Straub of anything, understand, just thinking that King genuinely influenced him.)

It's a period piece now, of course, but having been written in that period, and a period I remember, it captures a lot of what it was like to grow up in the 1970s. King is a very observant writer; his prodigious output and variable quality (Seriously, Cujo?), as well as his working in a genre that doesn't command critical respect have led him to be greatly underrated, in my opinion. His clunkers, er, clunk, but his best work is really very good indeed. 'Salem's Lot is, in my opinion, high among his best work.
Posted by Anglocat at 9:35 AM

Love the book commentaries. What do you think of Lawrence Block, and what might be your favorite Block novels?

A fine post for Monday night! (Seriously, I want to give it a little thought.)