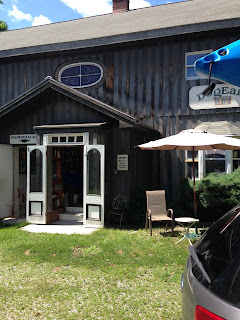 A long time ago, before a cataclysm that ended brought me to the much happier life I enjoy today, I lived in upstate New York, in a rural town where the 19th Century farmhouse I called home stood on 47 acres, and our nearest neighbor was a working farm, with a gorgeous gothic pile which I called The Marsten House.

The house was about a half hour from Bennington, Vt., and on the way there I had found the most wonderful little book store, Dog Ears Books on Route 7 in Hoosick, New York. How to describe the store? Well, here's Alan Bisbort in the The Albany Times-Union:

Hoosick Falls is the first stop on our tour, a relatively straight shot northeast of Albany on SR 7. Here you can find the venerable DogEars Books, half a mile east of the lone traffic signal on SR 7 (which is at the junction of SR 22). It’s a converted barn set off from the brick residence where owners Jeffrey and Sylvia Waite live. As you enter, classical music plays unobtrusively and Mr. Waite, usually, sits off to the side reading just as unobtrusively, while the many loyal customers browse. If you’ve come for long quiet pokes through piles of volumes, you are in the right place. DogEars Books comprises two levels and sections are clearly designated and kept in a sort of rough order. Many books are older and, because the barn is not exactly climate controlled, the barn has a not unpleasant smell of old wood pulp. The stock of approximately 30,000 volumes is shelved floor to ceiling, and the overflow from the shelves creates tottering piles that you must navigate as you browse (Lord help you if you want the book on the bottom of the pile). The only ornamentation is an interesting, oval-shaped stained glass window upstairs above the front entrance to the shop. In the wintry months, an old-fashioned wood-burning stove in the middle of the room keeps the place toasty. Attached to the front of the barn is a cellar full of bargain paperbacks, many of which have seen better days although patient perusing can yield a few treasures. Opens Fridays, Saturdays and Sundays.

Nowadays, I split my time between Albany and New York City. I get the best of both cities this way, but there's no denying it makes life more stochastic and solitary than would be ideal. This weekend, I had to stay upstate, so I'm without my weekly fix of St. Barts and without the company of la Caterina (who is coming up for a week starting Thursday, so yay!). As the afternoon drew on, and I had time, I drove for the first time in nearly a decade to Dog Ears.

It was just as I remember it, and Jeffrey Waite, the proprietor, time a little more graven on his features than when last we met, peered at me. His eyes snapped after about half a minute and he placed me.

"I've got the that Trollope Society set of his novels in 40-odd volumes," he said casually. Then he smiled. "I recognize you now."

So, once again, and long after I thought I would never have the chance, I got to dive through the treasures of Aladdin's Cave.

The thing about Dog Ears, and Jeffrey, is that his tastes are eclectic and deep. He evaluated my theological purchases, saying of long-time favorite W.R. Inge (whose Freedom, Love, and Truth I found), "He's all right." Pause. "That's to say, he's mostly harmless." He warned me off a theologically unsound cleric as an "early Norman Vincent Peale." We chatted, he discounted some books for me, and $100 later, I walked off with some fine books on liturgy, theology, a nice Wodehouse first edition, and a crisp, clean first of Wilson's Patriotic Gore. The chapter on Holmes alone is worth the price. Best of all was just being there again, chatting books with Jeffrey. Long may he reign.

On my way back, instinct took me out of the way to drive by my once and former home. Sadly derelict, but not defeated--it looks like new windows have been installed--I turned in to the once familiar driveway, and approached.

Bits of broken wood, shredded tires and other detritus littered the forecourt. The paint was faded more than when I had owned it. I felt a creepy frisson; the places where we were unhappy, deeply so, carry associations that never entirely fade.

Nonetheless, I hope the old place finds a proper steward; it's too beautiful to be let to go to ruin. As I drove away from that symbol of a dark and unhappy time, I could only hope that the renewal and hope that transfigured my own life since could encircle the stage on which that unhappy drama played.

Labels: Confessions of a Continuator