"And They Keep On Sacrificing Us": Christa on the Subway 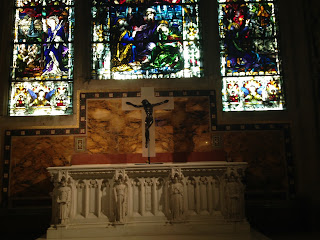 Sometimes events crystallize unrelated things into perspective. Yesterday, having arrived at the Cathedral of St. John the Divine early for the ordination of a very good friend, I decided to have a look at the installation The Christa Project, which, as described in the NYT, was originally installed in 1984:

Edwina Sandys had seen this before: the 250-pound bronze statue of a bare-breasted woman on a translucent acrylic cross being installed in the Cathedral Church of St. John the Divine.

This time around, however, she does not expect to see something else she had seen before: the statue being packed up after a call from a ranking church official telling her it had to go.

That happened the first time “Christa,” Ms. Sandys’s sculpture of a crucified woman, was shown at the cathedral in Manhattan during Holy Week in 1984.

A controversy erupted, complete with hate mail attacking it as blasphemous. Overruling the dean of the cathedral at the time, the suffragan bishop of the Episcopal Diocese of New York called the statue “theologically and historically indefensible” and ordered Ms. Sandys to take it away.

This time, it is being installed on the altar in the Chapel of St. Saviour as the centerpiece of “The Christa Project: Manifesting Divine Bodies,” an exhibition of more than 50 contemporary works that interpret — or reinterpret — the symbolism associated with the image of Jesus.

When I read the article, I wasn't sure how I felt about this, not as a work of art, but as an altarpiece and thus a focus for devotion.

Not because I have any discomfort with the Imago Dei being represented as female (I always think of the Holy Spirit in that way). Certainly not because I believe in complementarianism--I'm rather forcefully on the record to the contrary.

Not that I would censor it, or press for its removal, or criticize anyone moved by it. I just wasn't sure how I felt about it, for me.

And not that I thought it blasphemous (it patently isn't), or scandalous, or bad art (it's very good indeed, beautifully fashioned, evoking old Rosary crucifixes, rather like the one I wear on a chain, given to me by my parents, who received it from my maternal grandmother on their wedding day).

No, my ambivalence stemmed from my discomfort with theologies that distinguish the "Jesus of History" from the "Eternal Christ." (Yes, that means much of the 20th Century, and almost all (to date) of the 21st. You're surprised? I wasn't dubbed "the Valid Victorian" in college for nothing, you know, and my classmates knew who they were dealing with.) That's because I believe that Christianity's primary claim is a historical one as well as a theological one, one that focuses on the life and nature of one person, Jesus of Nazareth, and when we begin to step away from the man who lived and died and was seen again, well--we run into the danger of rendering him abstract. I need flesh and blood, not pretty stories.

But when I saw the work twice, first with a fellow-deacon who showed it to me, and then later that day when I showed a friend, the wife of a deacon, I was struck by the fact that both women had the same reaction: they saw it as depicting the sacrifice of women in society, analogous to that of Jesus. One of them even murmured, on viewing the sculpture, "And they keep on sacrificing us."

I began to see that my theological beliefs might not need to drive this particular train, even for me.

All well and good, but what about the envisioning Jesus on the Cross as female? How did I feel about Christa?

This afternoon made up my mind for me. After serving at St. Barts, I took the shuttle, so I could get the A Train. As the packed train pulled in, and I left it, I heard a woman say, "Get your hands off me." I turned around, and near to the back of the platform, a young man and a young woman were standing next to each other. I couldn't tell if the words I'd heard were spoken in anger, fear, or as banter.

Their body language ruled out banter pretty clearly, and, with people brushing by them with that NYC three-mile-wide-stare, he grabbed her arm.

I'd like to say that I walked over, in my clericals, and intervened. I hope and trust that I would have, had it come to it, but what I in fact did do, was quickly walk down the tracks, looking for police officers, and, thank heaven, I found two of them. As I was pointing out the man and woman to the officers, two young women joined me, and corroborated my account, and the two officers moved in before things could escalate. When it was clear the all was under control, I left.

No wonder both of my friends had seen "Christa" as capturing their reality! In a full, bustling vibrant public space, here was a young woman being bullied, forcefully seized in a possessive way against her will. None of the men around her stopped, or even looked back. The women mostly just kept on, grim-faced.

We're in the last throes of the most vicious political campaign of my lifetime, and how men treat women has come to be central in that campaign. No; that's sugarcoating it, and I won't traffic in lies here. Women's right to be free from assault is, apparently, up for debate at this election, and the seeming public acquiescence in violating that freedom.

The Incarnated Christ, the Historical Jesus, you know what?--they're both big enough to embrace Christa. Julian of Norwich, who was a lot more theologically astute than I'll ever be,wrote of Jesus as Mother, and I defer to her wisdom. Christa crucified reminds women that their experiences are embraced by God, encompassed in God's love, and that they, every bit as any man, are fully invited to partake in the fullness of God's love and redemption of Creation.

How about this: it could readily represent the Jesus of History for his weakness and suffering would have been seen as feminizing Jesus by multiple cultures. I bet he was called the equivalent of a p**** by his tormentors, etc. So a kind of meld between how he was versus how he was perceived (as a kind of "she"). A bit of a stretch, but there it is.

Not bad, Matthew; not bad at all.