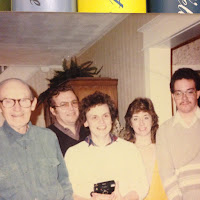 Yeah, there we are. My father, mother, sister, and my grandfather. And some weedy guy I don't recognize in a cheesy mustache.

Leaving aside the ladies for a moment (sorry; but it's Dad's birthday!), there are three generations of us there. My grandfather, storyteller par excellence and a skilled craftsman, my father, who is ridiculously talented--painter, tinkerer, builder of snow dinosaurs and snow bears, and the only man alive who would build a lapidary machine from scrap metal to cut a stone to make his wife a ring. (Beautiful gesture, if more convoluted than one of Colonel Blood's plots). And me.

Since today is my father's birthday, let me tell a tale out of school. My last year of high school, I participated in a program that let me take a full year of college credits (that's how I got through my BA in three years). In history, we were assigned to write a family history, using primary sources wherever possible. So, I went to my grandfather. The bulk of the history paper is a greatest hits reel for him, but in describing his own relationship with his rather formal father, a Victorian businessman, almost a new York City Forsyth, he admitted something strange me: He envied me my relationship with my father.

He admired my father for being able to freely love his children, to talk with them without having to be able to be right all the time, to laugh and play with us, to just be himself.

My Dad missed the Vietnam War. When we went to see Platoon the weekend it opened, I remember him looking a bit dazed by the end. (The Barber Adagio probably helped there; my Dad has a great ear for and taste in music). I assumed he was thinking about his generation. As we left the theater, he ruffled my hair.

"Thank God you'll never have to go through that," he growled.

My mother and father have loved each other and us truly and well. Thanks to them, I have never doubted that love can survive from youth to age. Believe in it? I've seen it done, as the old joke goes.

My grandfather was a very wise man, but he saw my father more deeply than I could as his son--I took for granted all his gifts. But now, myself in middle age, I know better. To paraphrase Dr. John Watson, happy birthday to the best and wisest man I have ever known.
Posted by Anglocat at 7:54 PM