Law and Gospel: A Day With Nadia Bolz-Weber 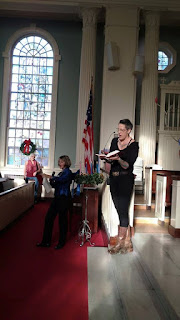 Day 2 of the Capital Region Theological Association's Weekend with Nadia Bolz-Weber, and I just want to comment on some of the high points> Before I turn to my takeaways from Pastor Nadia, let me thank the gracious and warm staff of the CRTC who made this newcomer feel most welcome, and who averted disaster for the members of my breakout session group (we ended up all at lunch together) after the restaurant--no names, no penal drill--took so long to produce our meals that we hadn't received them at the end of the time allotted for us to eat--the program was delayed to let us get back. Also, I want to thank Katy Stenta for her hospitality and kindness, as well as for good conversation in the intervals and the breakout sessions. (Now g'wan and read her blog; she's good; her twitter stream under #NadiaTakeover gives a pretty good précis of the day.)

Now to my own response to the day. Nadia's commentary on Grace continues to resonate with me, especially her explication of it answering a questioner who wanted to know what she meant by describing herself as a "Law and Gospel" preacher. Here's a summary of what she said, based on the notes I furiously tapped out on my iPad:

We want the law to save us us, but it convicts us. We want to justify ourselves by the law but nobody can live up to the law. But Law drives us to the foot of the Cross where we cry out My Lord and My God. Every time Jesus was confronted by someone who sought affirmation of their goodness through obedience ego the Law, Jesus pointed out that the Law demanded yet more of them. A young man is able to affirm he hasn't committed adultery--Jesus asks: Have you lusted after other? And, of course, he has. The Law is a lover that will never love us back.

Only grace saves us. But here's the problem; Grace is not comfortable--it's out of our control, it's that free, unearned gift. But it means that we can't earn salvation. Right relationship with God is't not having to bother him because we have achieved sinlessness. Christianity isn't a sin management program--it's accepting our need for God and accepting to that he wants to restore, redeem and forgive us, out of love.

She quoted Martin Luther: "Sin boldly, but believe and rejoice in Christ even more boldly" in explicating this notion, and its corollary Christian freedom--a phrase not heard often enough, she suggested. Nadia urged us to consider that what people loved about was not, as they said, its creativity, but rather its exercise of Christian freedom--the freedom of a people who know that they are fodiven, ransomed, and that they don't have to earn that forgiveness, just to live in response to it.

As a lawyer who discovered the limits of the Law in my own life, all of this strikes a deep chord with me. As did Luther's line--I think it was Robertson Davies who memorably said "Dare nobly, sin greatly" (in The Manticore, if I remember correctly.)

A final point--Bolz-Weber criticized much of liberal Christianity (rightly, in my opinion), for having a "high anthropology"--that is, for having too high an opinion of human goodness. She said that she only had to look at her own flaws--present as well as past--to know that that view doesn't jibe with reality. I can;t help but agree. Once again, that great passage from C.P. Snow's The Light and the Dark, where Lewis Eliot debates an official of the Third Reich, speaks for me:

"No one is fit to be trusted with power," I said..."No one. I should not like to see any group of men in charge--not me or my friends or anyone else. Any man who has lived at all knows the follies and wickedness he's capable of. If he does not know it, he is not fit to govern others. And if he does know it, he knows also that neither he nor any man ought to be allowed to decide a single human fate, I am not speaking of you specially, you understand; I should say exactly the same of myself."

Our eyes met. I was certain, as one can be certain in a duel across the table, that for the first time he took me seriously.

"You do not think highly of men, Mr. Eliot."