I mentioned, did I not, that I had obtained a copy of Butler's Lives of the Saints?

Well, here it is: 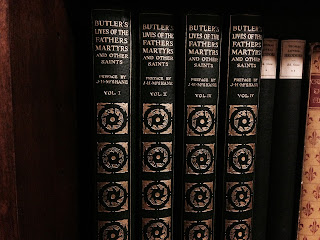 Meanwhile, in other book news, I stumbled onto a little treasure trove, including a nice copy of Letters of Hensley Henson, the letters of the controversial bishop of Durham (model for Susan Howatch's fictional Adam Alexander Jardine). Henson's letters, which I have only dipped into are quite good reading, and quite scathing on occasion. Of his onetime friend and one of my favorites, Charles Gore:

He was an aristocrat to the finger-tips, with an aristocrat's contempt for law and tendency to play the despot. He felt intensely for classes, hardly at all for individuals; the wrongs of the one stirred him to prophetic denunciation, the oppression of the other did not greatly perturb him. Religiously, he was utterly a Catholick [Henson's spelling], to whom the utterance of the rightful ecclesiastical authority was fial, but he was too learned and candid to be a Papist. I judge him to have been the most considerable English Churchman of his time, not the most learned, nor the most eloquent, but so learned, so eloquent, so versatile, and so energetic that he touched the life of his generation at more points, and more effectively, than any of his contemporaries. He was, like a Jesuit diplomatist, the best company in the world, with no sourness of ascetic oddity to mar the frankness of his good fellowship. His humor and his enjoyment of humor, were delightful. Yet with all this, there was in him an element of steel-like hardness, which, whenever it emerged, you knew it was quite useless to reason with. he seemed to me at the end rather a pathetic figure, for his disciples had gone to the right, and to the left, and he was alone. He was always listened to with respect, and then--ignored. Probably this is the fate which overtakes every leader who has outlived his generation, but n his case, it seemed to be emphasized by his tireless industry

After disclaiming the utility such for a biography, he adds: "I used to say that he was S. Carlo Barromeo redivivus."

My. Henson's reputation for bluntness was honestly earned, hmm?
Posted by Anglocat at 7:23 PM