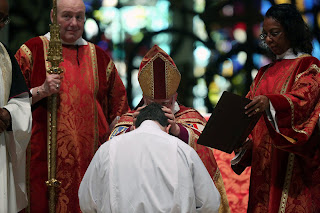 And that's the moment.

This past Saturday, May 16, 2015, I knelt before the Right Rev. Andrew M. L. Dietsche and received the laying on of hands, and was ordained a deacon in the Episcopal Church. Or, as the invitations traditionally--and are more theologically accurate in saying--state, I was ordained a deacon "in Christ's One, Holy, Catholic, and Apostolic Church." The Church Universal, not a sect. Our divisions are unfortunate, and reunion to be aspired to.

I've been walking this path now for over seven years. Four years of EfM (you can also hear me at St Barts on the subject). Three years of Diocesan training. A challenging but ultimately eye-opening academic year of clinical pastoral training, and a delightful academic year at St. John's in the Village as a "seminarian" (not technically, but as close as matters).

There wasn't a person I didn't learn from, not a moment that didn't enrich my faith and expand my heart, even the hardest pastoral care visits. The fact that I was allowed to represent the Church to people in extremis was terrifying to me, until I did it. I dreaded putting a foot wrong, making a mistake. But when I got in the room, it was not about me. Even if all I could do was stand at the foot of somebody's Cross and be with them, I was there to represent the love of Jesus Christ, not for some alleged wisdom of mine. Once that penny dropped, I was able to put aside myself, and focus on the sufferer.

At St. John's I learned a much more formal (but not fussy!) style of liturgy than I was used to, and discovered the intimacy off a small, vibrant parish. At all four places--the Diocese, St Barts, St. John's, and New York Presbyterian--I found willing, patient, mentors who spent time transforming a lawyer with good intentions into an ordained minister. The Rev. Deacon J.D. Clarke and the Rev. Deacon Denise LaVetty, in particular, have been, are, and will ever be, guiding lights in how to live as a deacon, an amphibian navigating between the Church and the World.

My debt to them is incalculable.

I'd say the same for my fellow newly ordained deacons--the Rev. Deacon Luis Rivera-Rivera, and the Rev. Deacon Shirley Lawson. I am delighted to call them by their new titles, and to thank them for all their manifold kindnesses to me over our years together. We bonded at our discernment conference, and they are my brother and sister in Christ, and not merely as a courtesy title, but in truth. Shirley's ebullient, uninhibited faith drew me further out from the ranks of the "frozen chosen," and Luis's serene acceptance of difficulties and challenges was an object lesson of what grace under pressure means.

So now to the great Joss Whedon question: Where do we go from here?

I don't know yet; my parish assignment will be worked out soon, and my interest in pursuing a ministry that involves restorative justice remains strong--though, as I learned over two years ago, it is a ministry that asks a great deal of people. There is much to be learned, much to be decided, and much work to come.

For now, this. On Sunday, I proclaimed the gospel, set the table, served Holy Communion at my home parish, St. Bartholomew's Church. I served alongside some of the finest clergy I have ever known, who embraced me, and welcomed me as a deacon among them. What's next will unfold.

Labels: Confessions of a Continuator, Episcopal Church, The Diaconate