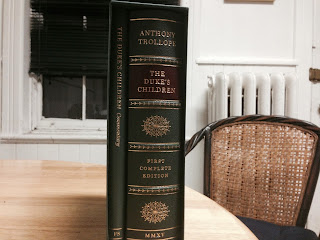 Ok, I bought it. Well, of course I would.

I mean, it's the actual, Anthony Trollope version of the last of the Palliser Novels. The sequence of novels are my favorite of his works, and among my favorite novels, period. (There are only a few others that share the top tier with Phineas Finn and Phineas Redux).

The Duke's Children, the end of the series (though possibly not where AT planned to end it), is a great novel in its previously published three volume form. I own a copy of the copyright edition, published in Germany simultaneously with the first British edition to prevent pirated editions being published: 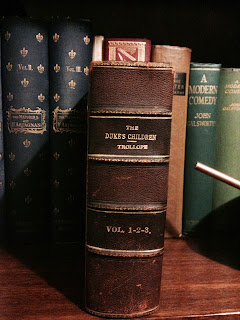 I'm very glad to have both versions, but I am especially glad that I'll have the chance to read it as AT intended.

Here's what Melanie Kirkpatrick, who will be speaking with me at the Trollope Society Dinner in May, has to say about the new edition:

Trollope’s drastic abridgment of “The Duke’s Children” “meant that, although most of the plot was retained and the book has been rightly admired in his shortened form, much of the in-depth characterization has been lost.” In cutting “The Duke’s Children,” Trollope did not eliminate any of the book’s 80 chapters. Instead, he deleted numerous passages and individual words. In doing so, he excised thousands of details about his characters.

The richer characterizations found in the restored version include that of the eponymous hero, the duke of Omnium, who is a former prime minister also known as Plantagenet Palliser. The duke is an aloof, enigmatic figure who plays key roles in the preceding Palliser novels. But it is only in “The Duke’s Children” that his inner life is explored in depth. That is part of the book’s appeal—to see a familiar character, a man readers thought they knew—emerge as a more fully formed person.

As the book opens, the duke’s wife—the vivacious Lady Glencora—has died, and the duke is left to deal with his three nearly grown children, their unsuitable suitors and their youthful peccadilloes. The duke, who has always been better at political maneuvering than at managing personal relationships, is at sea. The duke’s three children—Lord Silverbridge, Lord Gerald and Lady Mary—seem beyond his understanding or control. Trollope’s subject is the joys and sorrows of fatherhood.

“The Duke’s Children” is also about grief, about which Trollope’s descriptions may be unsurpassed in English literature. The book’s moving opening line is the same in both versions: “No one, probably, ever felt himself to be more alone in the world than our old friend, the Duke of Omnium, when the Duchess died.”

The restored version explores the duke’s grief in greater depth than in the abridged version. There is a poignant passage in which Trollope describes the duke’s guilt at having taken his wife for granted: “In those former days many a long evening he had passed all alone in his library, satisfied with blue-books, newspapers, and speculations on political economy, and had never crossed the threshold of his wife’s drawing-room; but now, when there was no longer a threshold that he could cross, he felt himself to be deserted.”

Silverbridge, the duke’s elder son and heir, emerges as a far more likable and sympathetic character in the restored version. “He comes alive,” said Mr. Amarnick, in a way he doesn’t in the cut version. Silverbridge starts out as a boy but becomes a man by the end of the book “and you see the steps along the way” to his maturity. It’s the “accumulation of subtle details that makes the difference.” Trollope is sometimes criticized for not devoting enough attention to his male characters, who often pale against the vibrant women who walk through his pages. In the extended version of “The Duke’s Children,” Trollope’s young men are as complex and credible as his women.

Both versions end happily, with the duke finally agreeing to accept Silverbridge’s and Mary’s choices of whom to marry. In the abridged text, the book’s final lines have to do with the duke’s grudging acceptance of Mary’s new husband. The concluding words of the restored version, however, set a different tone. Gerald, the younger son, gets the last word: “‘It will be my turn next,’ said Gerald, as he was smoking with his brother that evening. ‘After what you and Mary have done, I think he must let me have my own way whatever it is.’”

This ending raises the intriguing possibility that Trollope didn’t intend to end the Palliser series with “The Duke’s Children.” Did he have another Palliser book in mind? Did he plan to carry on with the story of Silverbridge, Gerald and Mary? We’ll never know. The author died two years after “The Duke’s Children” was published.

My own Phineas at Bay continues the story, and I try to keep faith with Trollope. Reading the restored edition will help me in continuing to do so in my next work.

I'm sure you're aware that, back in the late eighties (or was it the early nineties?) Folio published a "Complete Trollope" set. I ended up with thirteen volumes, though subsequent sales and culls have left me with only six. I was a little disappointed that they didn't offer a new "Duke's Children" in the old format, to fit into the beautiful old sets.

Not that I don't appreciate how your own love of Trollope has led you to continue those stories. And I wonder, do you think it would be some degree of magnitude more difficult to continue Dickens, with "Micawber in Australia," or the further adventures of Pip and Estella, or is it just that Dickens reputation and wider popularity might make such attempts seem more presumptuous?

Good luck on your speech. I once was asked to give an "immortal memory" speech at a Robert Burns Dinner, and the best I can say is that the bulk of the audience was probably too drunk to have remembered the next morning how lame my speech was.

Yes, in pari delicto is the only defense I could have offered, so--I am glad to be spared the (justified!) chiding.

I have about ten of the Folio Society Trollope. After my paperback were destroyed back in 2005, I've been buying good reading copies where I can. I have a nice set of the Barsetshire books and the Pallsier novels in leather from the late 19th Century, some almost firsts--Copyright editions--and the Folio Society copies.

It would be impossible for me to do a Dickens continuation. Not that it hasn't been done, and done well. Peter Carey's "Jack Maggs" is a very creditable job, though he changes the characterization and plot significantly.

No, I mean *I* couldn't do it. Dickens's characters are magic--often seemingly grotesques or caricatures, and yet imbued with life that is all their own. Trollope's palette is more somber, more deep, but smaller. AT's genius is, as someone (I can't remember who) once said "a perfect appreciation of the ordinary." Dickens's was its transfiguration.

Though, dear heaven, "Micawbers Abroad" would make a great title, and is awfully tempting. :)

Thanks for the good wishes on the speech; If they neither sleep nor revolt, I will record it as a win.