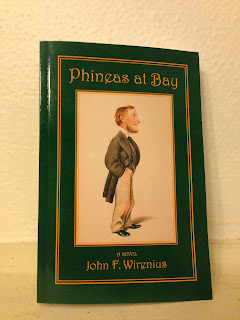 Well, it's been a bit longer than expected, but Phineas at Bay is now available for your reading pleasure:

“Phineas at Bay is at once an entertaining romp and a serious inquiry into how Victorian problems are also our own. It is a pleasure to read.”—Nicholas Birns, author of Understanding Anthony Powell.

Phineas has become an almost entirely independent member of Parliament, nominally belonging to the Liberal Party. But his independence has come at a cost. Having made no political gains, his own party no longer takes him seriously. But an awakening of his political and social conscience leads him to revitalize his political activism and become involved in the newly forming Labour Party.

Meanwhile the rivalry between Socialist Jack Chiltern and the newest member of Parliament, Savrola Vavasor, the two suitors of Phineas’s orphaned niece, Clarissa Riley, draws Phineas into becoming the maître d’armes at a violent duel.

And alongside all the other action, the beautiful Lady Elizabeth Eustace adds to the drama with her shady past and her entanglements with Jack and her ex-husband, a clergyman with a dark reputation of his own.

Scholar and lawyer John F. Wirenius sets the Victorian-era author’s pointed satire loose on today’s political and social excesses, creating a novel that can be read alone or in conjunction with Trollope’s novels.

Having Nicholas Birns's encouragement, after hearing his first-rate lecture on the "Phineas Diptych" as he called the two original novels--Phineas Finn and Phineas Redux--was a great spur toward completion; my editor Karen Clark was enthusiastic in the best way--forcing me to not settle for easy paths out, but to keep working to make it the best book it could be; Susan Wright's feedback and brio for the project, and that of my own father, all kept me writing.

Mostly, of course, though, I did it for la Caterina, who had urged me back in 2006 to tackle the project.

It's out now, and I'll be pushing it, of course. But I can tell you this: I wrote it for the love of some of the most rich and three-dimensional characters in English literature, and their brilliant, bluff (but really tender as thistledown) creator. And I did my best by them, and him.

I hope you'll stop by and have a peep at the book, and maybe even buy it. And if you haven't read the originals--well, you've a treat in store.
Posted by Anglocat at 7:17 PM