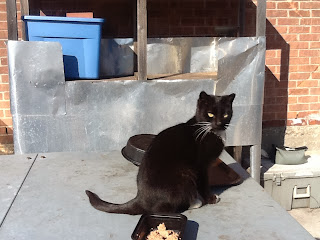 Yesterday was a pretty spring day, which led La Caterina and myself to both go take care of the cats at the Brooklyn Navy Yard. We have to move the cats from the back annex (largely wild country, dotted with some once-beautiful, crumbling buildings) to a smaller tighter area called "Admiral's Row" (also dotted with crumbling buildings, but less open space_

The loss of the buildings at both sites strikes me as tragic--so many beautiful creations allowed to decay--but both places have a picturesque charm.

So, to check it out, we pulled out our Citibike keys, got bikes out, and took a spin around the area. Now, I'm a fan of the notion of bike-sharing, but this was the first time I'd been on one from the NYC program. It was easy to handle and ride, the day was lovely (it was just 3:00, so the warmth was at its acme), and we tooled around the peculiar mix of the sylvan and the industrial that is the BNY.

Now, I haven't ridden a bicycle in a few years (my last apartment in LIC was not well positioned for riding), and--well, it really is like learning to ride a bicycle; you never forget.

As we rode around, though, an ear worm attacked, and the song that my sister and I were taught long ago in chorus rose unbidden in my mind: