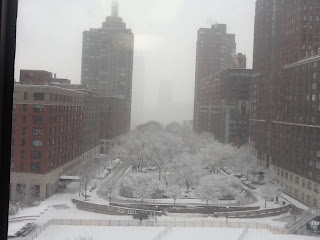 You have to admit, the snow falling in New York is a beautiful thing.

Even though I've been shoveling snow way longer than I've been playing in it, I still react to the snow with a child's glee. I remember my father building a snow bear one year, and a snow dinosaur the next, a winter when I was in law school, and the snow was so heavy that all the public transportation was closed, and I sort of sued through the magically silent streets to meet friends in the upper seventies from 114th Street.

On days like this, the City can be what O. Henry famously called it: Baghdad on the Hudson, an appellation when that poor, war-torn city connoted not horror but the magic of Burton's Arabian Nights.

Maybe we're all a little the worse for wear, but still: "The heart grows older, but never, ever learns. The memories shoulder, the soul always yearns…."