Fitting Phineas Into His Times

Just dropping a few thoughts regarding Phineas at Bay. I have made to the halfway mark of Volume Two (that is, the 3/4 mark of the whole), and that has me thinking of the actual book--how I'd like it to look, what sort of framing materials or illustrations might be apt.

Now, back in 1989, I bought off a street vendor (he had a lot of books, and old original prints), a series of six caricatures from Vanity Fair. I had them all framed, and have hung them in each of my homes in the last 24 years. For years, I always smiled at one in particular--not because it is the most witty (far from it; it's unusually respectful for VF), but because to me it looked like a perfect caricature of Phineas Finn at the time of the action of Phineas Redux (1874). I then promptly forgot about that caricature, despite seeing it every day--remember Sherlock Holmes saying "You see, but you do not observe"? Guilty, m'lud). Until last night, that is, when I noticed my old friend, Phineas Finn over the mantlepiece:

The artist, by the way, is not the famous "Spy" (Leslie Ward), but the somewhat less famous, but highly regarded, Delfico, who was well known for his caricatures of Verdi. Spy did get a hold of Trollope, though: 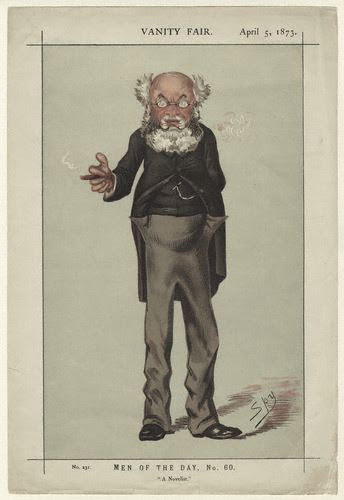 One interesting problem has been how close to get to actual history. In keeping with Trollope's (and many other Victorian novelists--Conan Doyle did this in every Sherlock Holmes story, pretty much) penchant for keeping dates elusive, I'm setting the date in 189-, and feeling free to pillage the entire decade for plot points, characters and context. This allows me to stave off the evil moment (from my plot's perspective) when the Tories take over the Government. For Phineas' conflict with his old friends to have any heft, it must matter, and if the Liberals are in Opposition--well, really, who cares what any of 'em does, as long as everyone's harrying the Government.

In addition to being in Trollope's vein, it is almost required by Trollope's own novels; The Prime Minister (1876) depicts a caretaker Coalition Government, comprised of both major parties. It prefigured the Coalition Governments of World War I and thereafter, but especially Churchill's wartime National government, in that the two main parties joined together. It was, in fact, inspired by Aberdeen Ministry of 1852-1855, in which a breakaway faction of the Tories, the Peelites joined with the Whigs (later the Liberal Party).

So, my use of history has been guided by these wise words: