As you may have picked up from reading the blog, la Caterina runs a feral cat colony at the Brooklyn Navy Yard as part of the NYC Feral Cat Initiative. (I'm just "Thog, lift!" in this enterprise.) We also have a couple of cats in the back yard we feed, having had them neutered and ear-tipped, so that if they are ever seized, Animal Control or any shelter will know they are part of a colony and not ice them. One, a gentle orange tabby, was originally named Popeye, but for some daft reason I renamed him Mr. Popplethwaite. The other, a beautiful little black cat with a white spot where a lady's locket would fall, la Caterina named Elvira. While very sweet to people, Elvie is a shrew to other cats, and beats up mercilessly on Popples. We decided that the situation couldn't go on.

As luck would have it, a friend of ours who lives in the Bronx was interested in Elvie, and Wednesday night, la C drove Elvie up to her new home. Popplethwaite kept looking around for Elvira, and even called for her a few times (masochist!) but eventually settled down.

This morning, la Caterina urgently called me to the window where we beheld Popples--accompanied by a small black cat, with a a white spot where a lady's locket would fall. I heard myself call out, with a sudden Welsh burr to my voice, "Audrey Rose! Audrey Rose!"

Alas, she slipped away into the next yard.... 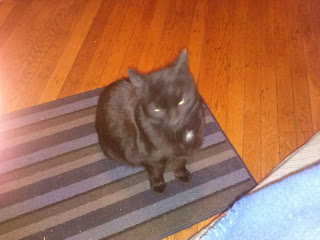