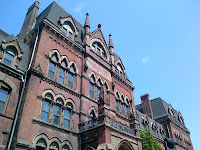 When I was a boy, I was opinionated, mouthy, and weedy--bursting with excitement at all the wonderful things I was learning in my compulsive reading, and incapable of shutting up. In short, I was a right pain. (I'm not saying things have changed all that much you understand, though I like to think I've grown some protective coloration). I was most assuredly not a great fit for my local junior high school--a place so unpleasant that it was closed a mere five years after I attended 7th Grade there. My parents, recognizing this, sent me to St. Paul's School for Boys, an Episcopal school which occupied a gorgeous, Gothic hulk whose beauty caught my heart from the very first time I saw it. It was like nothing else I'd ever seen in real life, and precious few I'd ever read about--it reminded me of Carfax Abbey in Dracula, the only thing to which I could compare it. (The Chaplain in my time at St. Paul's, a gentle, kind priest, Fr. Donald Hood, didn't care for that comparison, and introduced me to R.F. Delderfield's To Serve Them All My Days, thus introducing me to the first of the "first-class second-raters" who have enriched my reading life immeasurably, so a belated thanks Fr. Hood, for that and many other kindnesses).

We had regular chapel services, which introduced me to the Book of Common Prayer, and the beauty of Anglican worship performed well, but not pompously. (As a Roman Catholic--as I then was--I was barred by my parents from receiving communion there, and I skylarked by slipping thin novels into the Prayer Book and reading through Chapel, until, after a few months, the rhythms of the BCP caught me, planting a seed which would grow years later. But that's another story.)

St. Paul's was gloriously eccentric--we had a music teacher with a Bill Murray flippancy, concealing a passion for his subject, teachers good, bad and indifferent--including one Social Studies teacher, a former RC monk, whose impatience terrified me, but who could be surprisingly kind, and a math teacher who tried with desperate, never-ending optimism, to get me to see the beauty of algebra.

The headmaster seemed to me to be an eccentric himself; Doctor Casey, with whom I had only a few short (not unpleasant, mind you) encounters, who had--I believe I recall this correctly--a gorgeous but very large parrot loose in his study. (Dr Casey was a veterinarian so this is at least within the realm of possibility. And I know that this sounds like I'm pulling the longbow, but I swear the parrot got out at least once in my year there, and swooped through the gothic hallways like a bat through Carfax Abbey.)

St Paul's had its downside--hazing, teasing which could be quite cruel, and a certain upper-crust snobbery that some of the boarders had for us day boys. But there was an elegance, a tolerance for and even acceptance of eccentricity that was an education in itself. Its beauty opened a vision of a wider world to me, and was a critical stage in my education, readying me for the much more intensive, much more disciplined education I received at Chaminade High School.

I tell you all this because, now, alas, my vision of St. Paul's as the derelict abbey bought by Dracula in Stoker's novel has come to pass, and the abandoned halls are slowly caving in on themselves. It's a ruin worthy of the pen of Edgar Allen Poe:

The village came to own it in 1993, as part of a prized parcel of 48 acres it bought from the Episcopal Diocese of Long Island for $7.25 million. The chief draw was the land’s vast expanse of athletic fields, and a mayor’s committee was formed to figure out how best to use St. Paul’s

Then the arguments began.

The building needed work. Leaks had riven the slate roof, interior mantelpieces had toppled and plaster chunks had crumbled in its stately halls and stained-glass-lined chapel. Restoration estimates proffered by the village — and contested by its opponents — ran into the tens of millions of dollars, which some village leaders felt taxpayers would not or should not shoulder. Public uses for the building — moving the library there, or the town hall, or a high school — were abandoned by village leaders in favor of possible private uses.

Through the years of acrimony, the building stood tall, still solid but beginning to give in to the ravages of time. The leaks worsened, more plaster littered the vast wooden floors and splintery holes appeared on the face of the soaring clock tower. In 2003, the Preservation League of New York State listed the school as an endangered site on its “Seven to Save” list.

St Paul's is, with the Cathedral of the Incarnation, one of the last remnants of a Long Island community that dreamed of being more than an ordinary suburb. If it indeed is lost, Garden City will take a giant step closer toward mundanity, toward the loss of individuality and specialness that marks the slow nationwide trend toward exurbia.

More importantly, a true work of beauty will be lost, forever beyond restoration. And we will all be the poorer for it.