Well, Harry has now gone to his new home, after a little over a week in our care. He's been a pleasure to get to know; immensely lovable, starting off rather timid, but soon becoming at home with us, and playing with us both for hours at a time. (I'm home today, and while I watched The Invasion of Time in bed, Harry alternately gnawed my index finger, pretended my hand was prey, and, best of all, curled up in the crook of my arm and lolled back like a rag doll for a nice long snooze. Harry liked Leela, but repeatedly swiped away Borusa on the touch screen, proving himself a fine judge of character). 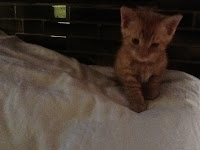 Harry is a very lucky kitten--just a little over 6 weeks the vet estimates--very healthy, and going to a home where I know he will be loved and well cared for. It's even a success for his feral Mama, whom we've decided to name "Mathilda," after the mother of another famous ginger named Harry, was visibly wasting away trying to feed him. In just the 10 days since we abstracted Harry, she's put on weight and regrown lost fur. Time to get her to a vet, fixed and returned to the habitat.

So in all, a successful operation. Harry goes from feral cat with the short life that entails in this City to pampered house cat, our cats get their territory and primacy back, and la Caterina and I can get some bloody sleep.

But, all that said, I will miss the little devil. After all, wouldn't you?