So, on my way home from a wedding tonight, I walked passed some book dealers up by my old alma mater, and stopped in a bookshop I've visited from time to time over the years (Westsider books, to be precise. They have some very nice things, reasonable prices, and friendly staff. Drop in, if you're in the area.) Just as I was leaving, I spotted, in the "signed books" section, a copy of Robertson Davies's The Lyre of Orpheus. "Signed?," I thought, "pfui; I don't believe it." I picked it up, turned it over. Good shape, nice dust jacket. Someone highsmithed it already. Nice. I opened it. First American Trade Edition, it read on the copyright page. But--I have one. Oh, a little bit more worn, but still...So I turned the page. And, whaddaya know: 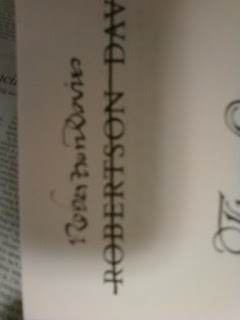 Now, I met Dr. Davies once, near the end of his life, on a reading tour for his last novel, The Cunning Man. I didn't get that book signed because I had a first Canadian, and Davies did not sign books at the reading; one bought copies afterward that he had already signed. When I got to shake his hand, he was affable, and kind, to a fan (his wife Brenda was even more gracious), and I immediately regretted not buying a signed copy at the reading. Years later, a replay was offered me.

Reader, I grabbed it. A subsequent review on Abeooks convinced me that I had done tolerably well as to price; not the lowest price for this book signed by RD in this condition, but well within the range, with a fair number going for more than I paid and a few below.

So why? La Caterina, who does not get fannish behavior at all, was not harsh, but in view of the fact that this is simply a better copy of a book I already had, it seemed, well, silly to her. No doubt it is. But books are to me much more then their contents. Don't get me wrong, I appreciate the Kindle, the iPad, all the ways of getting a lot more to read and enjoy. But for the stuff I love, a connection with the author--seeing it the way he or she did when it came off the press, or owning, in the case of a great writer like Davies, a copy he's signed with his fountain pen, and the laboriously learned dramatic signature he acquired in mid life (seriously, Judith Skelton Grant's bio is a treasure trove), I want the "real thing." The one that doesn't need to recharge. That's tactile. That's, well, and here I make common cause with Rupert Giles, smelly:

Giles says the problem with computers is that that they don’t smell. He goes on to say how smell is a powerful trigger to memory. “Books smell musty, rich,” he says, “knowledge gained from the computer has no texture, no context.” He closes his arguments with, “the getting of knowledge should be tangible… smelly.”

Fanzine friend Tom Roe found a copy of "Doc" Smith's Triplanetary at a thrift shop, and knowing my love for the Lensmen series, picked it up for me.

Right up there with the day I jokingly asked if a bookshop had a copy of Seduction of the innocent, and they'd just gotten one in.

Big difference, indeed--I have a few inscribed books (including one by John Houseman, who we saw together, lo these many years ago, and a couple by Lawrence Block inscribed to me), and it's great to see how the author couches the inscription.

I exulted with you then on your bagging Wertham; I exult anew on hearing about the Triplanetary.