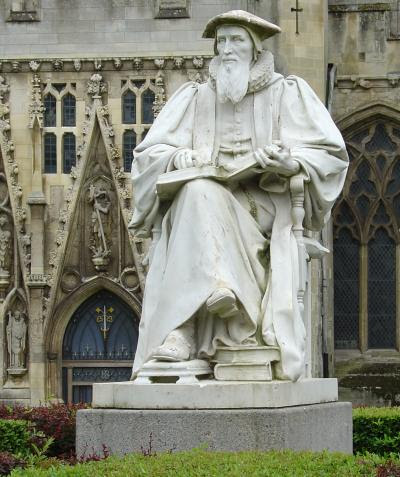 I'm kvetching about the elections over on Facebook, but I'll spare you that. Instead, let's take a moment to commemorate Richard Hooker, that "learned and judicious divine."

Hooker's merits grow in my estimation the more I read him, and, frankly, the more I read others. Where Cardninal Newman's thirst for an infallible institution which can command obedience as of right, Hooker strove to restore reason to its proper place in the spiritual life. Without being disregardful of Scripture and Tradition, Hooker validated the role of reason in interpreting both.

Not that Hooker was a modern; far from it, he was deeply engaged in the struggles of his time. That said, he brought a charity and a clarity (he's the easiest read, by far, of the Elizabethan writers I've read) that illuminates every issue he writes about.

Here is an interesting introductory reflection on Hooker for those who would like a first taste.

A collect for the Richard Hooker, November 3:

O God of truth and peace,
who raised up your servant Richard Hooker in a day of bitter controversy to defend with sound reasoning and great charity the catholic and reformed religion: Grant that we may maintain that middle way,
not as a compromise for the sake of peace, but as a comprehension for the sake of truth;
through Jesus Christ our Lord, who lives and reigns with you and the Holy Spirit, one God, for ever and ever.