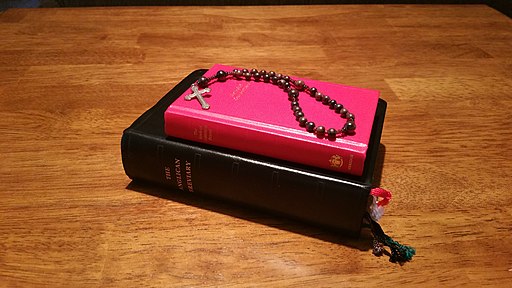 Right, I think we've had our excitement for the weekend; let's talk more positively for a bit.

I'll admit that Thursday's and yesterday's news provoked me greatly, with Abp. Welby's non-apology apology to the LGBT community only making matters worse. The grace and resolution of our Presiding Bishop Michael Curry and of Andrew Dietsche, my own diocesan bishop were something of a balm.

But, as I used to say in my days as a mentor for EFM, the last stage of a theological reflection is the "So what?"--that is, how do we use this in our day to day lives? Where do we go from here?

Yesterday, I found myself stepping up my prayer regimen. I've been praying the Daily Office for some years (generally, Morning Prayer, Evening Prayer, and Compline) for some years, since my friend and mentor the senior Deacon at St. Barts urged me to try it. It's been a longstanding practice that has enriched my life.

But this Christmas, when a friend of mine posted a picture of his new Anglican Breviary, I succumbed to a fit of book envy, and ordered a copy online. It's complicated, with 8 offices instead of the 4 in the Daily Office Book, and it's extremely Anglo-Catholic--higher in its churchmanship even than I am, in some ways. But there was a comfort to its familiarity, hearkening to prayers I remember from my Catholic boyhood, and even in its older, more robust language. Yesterday I added two more offices than normal. I found it calming, and centering.

I stand by every word I wrote Thursday. (Except for the typo!) But here's the thing: Life goes on. Anglicanism has given us a rich heritage of a broad church, uniting Catholics and Protestants, liberals and conservatives, around the altar. We're right strive to preserve that.

Ultimately, the Episcopal Church will be fine. Oh, I know we're shrinking like all the mainline denominations. But I have faith, you see, that God will lead us to where we need to be.

If my suspicions are right, and the Communion does not hold in its current form, whatever else befalls, the resources of Anglicanism are there for us. Liturgical prayer, the offices, the Eucharist. Richard Hooker, Charles Gore (hey, today's his feast day!), Hensley Henson, and all of the other theologians, activists, musicians, mystics and troublemakers who comprise the cast of characters who formed our tradition are going nowhere. The great choir music remains, as does our heritage.

More to the point, if we, to paraphrase Archdeacon Grantly, in a rare moment of spiritual depth, lack guile and love God, we will never go far astray.
Posted by Anglocat at 9:37 AM