Cyrano--a New Adaptation by Erica Schmidt at the New Group 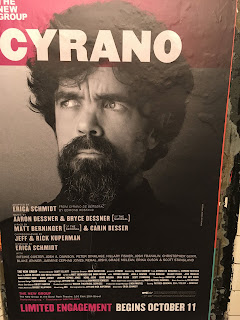 I'm delighted to report that Cyrano, director Erica Schmidt's bold adaptation of Rostand's classic, is an innovative, compelling reworking of the original. As a lifelong fan of the original (José Ferrer was my first Cyrano, and until now my favorite), I've always loved the play, and when I hear it was to be adapted into a musical, I was. . . concerned. (Wrongly; the score by Aaron Deesner and Bryce Dessner is admirable; the lyrics by Matt Berlinger and Carin Besser are as well). Then I heard that Peter Dinklage was to take on the part, I was...intrigued. I thought Dinklage could be a great Cyrano--if the script let him.

From his first bellowing denunciation, to his sharp pull of the heartstrings at the very end, this is a Cyrano to remember. He's as witty as Ferrer, but exceeds his in the emotional nuances. Cyrano's fear, his self-loathing that motivates his heroic feats--all these feel organic and fully realized. Cyrano's bravura is a defense mechanism, as Dinklage plays the role--in part. Because Cyrano's repugnance at time-serving, compromise, and lack of gallantry--these are deeply held views that define the gallant man he has created himself to be, despite the world's disdain. And these views put him on a collision course with the Duke de Guiche (A first-rate Ritchie Coster, in a nuanced performance, at turns a comic monster, an ogre of exploitation, and a dangerous foe. But also a man in love, and one who comes to have a deep admiration for Cyrano).

Cyrano's love, Roxanne, played by a luminous Jasmine Cephas-Jones is stronger than in most versions of the story and neither Cyrano nor Christian (Blake Jenner, a strong, solid performance) can refuse her anything.

But the surprise of the show is that Ms. Schmidt has made some risky directorial choices, and they all come romping home successfully. First, she severs the link between Cyrano and the 17th Century in which Rostand set his play and the real man (no, really!) lived. Rather than unmooring the play, it sets it in a non-specific but nonetheless concrete world adjacent to ours, in which in the first act the soldiers evoke heroic musketeers (d'Artagnan, a character in Rostand's play, does not appear in Schmidt's adaptation), but in the second act evoke the American Civil War. Rather like Christopher Fry's The Lady's Not for Burning, this Cyrano is all of a piece, sealed off from our time.

The choreography by Jeff and Rick Kuperman--which is superb--compresses Cyrano's battle against 100 men into a shadow dance, music and rhythm depicting Cyrano's strikes again his many foes, and their gradual defeat. Similarly, the workers at the pastry shop heighten the emotional resonance of Cyrano's critical conversation with Roxanne, and then with Christian.

The last scene--Roxanne at the convent, de Guiche visiting her, and Cyrano's newspaper--begins softly, and ends with the tragic ending we knew was coming. As the leaves fall, Dinklage poignantly asks, "Can they rest, now?"

Cyrano finally can, as well.

The whole production has a feel of--appropriately enough--Cocteau's magical Beauty and the Beast (1946), and like it, is suffused with enchantment, in this case, through the brilliant staging and the music and choreography which take us away from the mundane world, even that of the 17th Century, and into the magical worlds created by artists like Cocteau, Fry--and Erica Schmidt, whose vision for Cyrano is fresh and challenging (this production censures Cyrano for his pride, instead of applauding it) and yet feels as old as tragedy itself.

A sublime evening at the theater, and one that lingers.
Posted by Anglocat at 5:54 PM