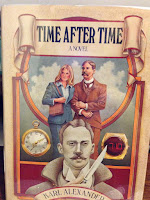 So says H.G. Wells, at any rate, in Time After Time, of which I have been a fan since I saw it in the theater in 1979. (Yes, children, the Anglocat is past its first youth.) And that line attributed to Wells in the film, is a big part of why. The chemistry between Malcom McDowell and Mary Steenburgen, and their genuinely sweet romance. In a 2013 reunion interview, both McDowell and Warner call Time After Time a romance story at heart. It's worth watching:

And then there's this:

That's pretty deep for a low-budget high concept (H.G. Wells vs Jack the Ripper--seriously, that's clever if cheesy) film by first time director. But the movie has heart, and the actors sell it brilliantly.

But I had no idea that it was based on a novel, which Nicholas Meyer optioned before it was published. I stumbled on the fact in reading an interview with Nicholas Meyer that popped up when I verified that it had been made into a 2017 series--which has already been cancelled before I even saw one episode.

But, bibliophile raised its lovely head, and I visited my good friend Abe, and I found my prey. That is, the first edition first printing depicted above.

I'm partway through it. Author Karl Alexander's Wells is less innocent than McDowell's, and perhaps a bit less likable. The book moves briskly, though less so than the film, and Wells has a harder time acclimatizing to the 20th Century than his quarry, Stephenson.