A Valedictory for the Year 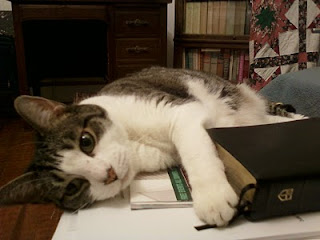 This may not be the last post of the year--la Caterina and I are planning a quiet and restful New Year's Eve, and, if anything sparks, I'll probably have time to add one last thought for the year. It's been a strange one, 2016. I was born in a year ending in 6, and for the last three decades, those years have signified major change in my own life. 1996 and 2006 were two of the toughest years in my life.

2016--well, keeping things in the "I" as they say in EFM, and leaving outside forces and stories aside, it has been one of change, as were its predecessors, but far more positive.

My own life in the law and in the church have taken me in different directions than I anticipated. In my legal role, the unexpected departure of a great leader and friend led to me taking his place. In the last six months, I have been challenged, engaged, and genuinely touched. I could not be more grateful for the chance to try to make a difference.

Likewise, my ministry at St. Barts has been a revelatory experience. In this first full year of ministry, I have had the chance to preach, teach, and to create a protocol for Eucharistic Visitors. ("Create" is unduly generous. Make that "cobble up from the work of others"). Here's fun fact: my best source of several fine ones for the protocol came from a diocese that I know, but where I probably could not get licensed, due to my pro-same sex marriage views. It was interesting and humbling to encounter those with whom I strongly disagree in a context where I learned greatly from them. It's a good reminder to me of what C.P. Snow called "the virtues of the other side."

Normally, I do a conspectus of the blog at year's end. But I think I want to quote one post on just this theme tonight:

Blog mascot Betty the Anglocat has taught me many lessons. And this morning, as she lay next to her old adversary Elspeth P. Kitten, I thought how lucky I am that these disparate animals who make up our herd of cats live in (relative) peace.

Later in the day, I reflected on what a gift the people we disagree with can often be to us. Oh, I know--we can get into shouting matches, flame wars, succumb to obsessive "comment wars" because someone is wrong on the internet. La C often uses this cartoon to call me out. And she's right to. Because sometimes they teach me things I need to know and even offer me comfort when I need it. The trick, I am slowly realizing is to shut up and listen. Not just hear, listen, and try to see why we disagree, and to disagree respectfully.

It doesn't mean caving. It means respecting the person with whom I disagree enough that I make the imaginative effort to see through his or her eyes, and to grasp their perspective emotionally, not just logically. It makes disagreeing much less disagreeable when I don't leap to the conclusion that disagree with me is clearly done in bad faith or lack of thought. (I know; I'm turning 50 this year--you think I'd have learned this sooner.)

Another example: I just this past week bought a devotional book that is privately published, kept in print as a labor of love. The person who curates this work is someone with whom I am at variance on several issues significant to us both. I wrote directly for a copy, and received an email that was warm and gracious. This person has enriched my life; if we had met in a different context, we might have seen each other as caricatures not people with much more in common than might otherwise be thought.

I still use that devotional book, for certain seasons of the liturgical year--

--Side Note: For the rest of the year, I pray the Daily Office, using the Daily Office Book. I mention this because here's another point of connection with someone I often disagree with, sometimes on his blog, sometimes here. Regardless, I do agree with Dreher on the power and utility ritual, liturgical prayer (versus spontaneous, extemporaneous prayer). And, by the way, it's not either/or--you can make room for spontaneous prayer within the liturgical framework of either the Office or the Breviary--

We still have Elspeth; we still have Betty. They coexist. And so, at the dawn of this blog's tenth year, it's still Betty's blog, I'm still Anglocat, and we'll go on prowling into the future.
Posted by Anglocat at 6:55 PM